Difference between revisions of "1984 AIME Problems/Problem 15"

Rewrite the system of equations as

This equation is satisfied when

, as then the equation is equivalent to the given equations. After clearing fractions, for each of the values

, we have the equation

. We can move the expression

to the left hand side to obtain the difference of the polynomials:

Since the polynomials are equal at

, we can express the difference of the two polynomials with a quartic polynomial that has roots at

Note the leading coefficient of the RHS is

because it must match the leading coefficient of the LHS, which is

Now we can plug in

into the polynomial equation. Most terms drop, and we end up with

Similarly, we can plug in

Now adding them up,

with a sum of

/*Lengthy proof that any two cubic polynomials in

which are equal at 4 values of

are themselves equivalent: Let the two polynomials be

and let them be equal at

is cubic, but it equals 0 at 4 values of

. Thus it must be equivalent to the polynomial 0, since if it were nonzero it would necessarily be able to be factored into

which would have a degree greater than or equal to 4, contradicting the statement that

are equivalent and must be equal for all

Post script for the puzzled: This solution which is seemingly unnecessarily redundant in that it computes

which can be plugged into the given equations to check.

As in Solution 1, we have

Now the coefficient of

on both sides must be equal. Therefore we have

Before starting this solution, I highly recommend never following this unless you have no idea what to do with an hour of your time. Even so, learning the above solutions will be more beneficial. 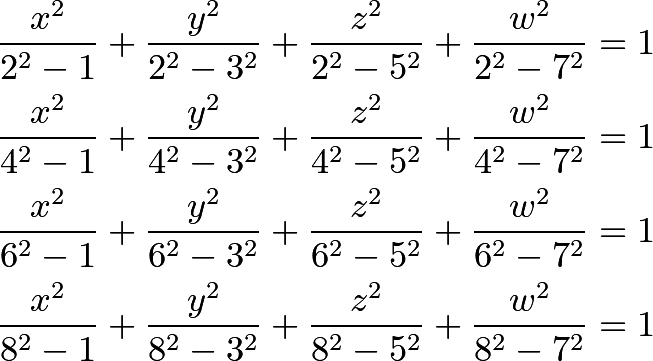 can be rewritten as 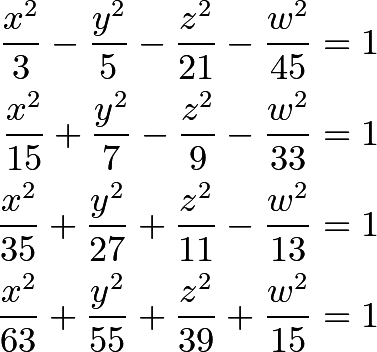 You might be able to see where this is going. First off, find

. Then, multiply by the respective lcm to clear all of the denominators. Once you do that, maniuplate the equations to solve for

Now, most of this is just a brainless bash, and reemphasizing, please try to learn the above solutions. This is only a last resort and only to be used if you have too much time left. The exact amount of time this bash takes depends on the person and how quickly they can manipulate the equations.

Solution 4 (easy sol, not much algebra)

Note that each equation is of the form

. Removing fractions, we get

Instead of expanding it fully, we will predict what the coefficients of the

term would be, since that's only what's important to us. So, we can write the long equation as

. We rearrange this to get

By Vieta's Formulas, we know that the sum of the roots of this equation is