meters. We wish to find

Together, the recursive formula for 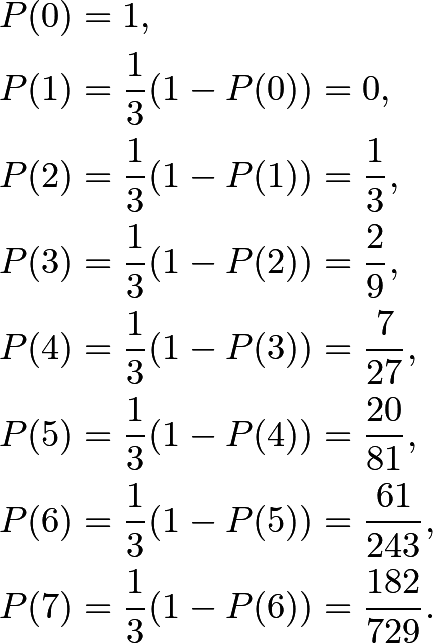 the recursive formula for

For simplicity purposes, we set

is a geometric sequence with the common ratio

the first term of the geometric sequence.

the explicit formula for

and the explicit formula for

Finally, the requested probability is

ways for the bug to make

denote the number of ways for the bug to crawl exactly

and ending at vertex

is a positive integer. We wish to find

Since the bug must crawl to vertex

on the first move, we have

More generally, we get

is a geometric sequence with the first term

and the common ratio

Therefore, its explicit formula is

In fact, we can generalize the following relationships for all nonnegative integers 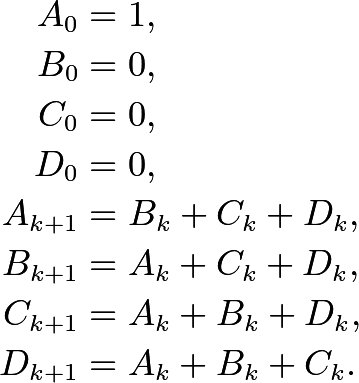 Using these equations, we recursively fill out the table below:

Note that the paths from

and the paths from

have one-to-one correspondence. So, we must get

for all values of

denotes the number of ways that the bug arrives at

meters, then we have

Notice that there is respectively

way to arrive at

for each of the different routes after the previous

crawls, excluding the possibility that the bug ends up at

th crawl (as it will be forced to move somewhere else.). Thus, we get the recurrence relation

be the probability the bug lands on vertex

be the probability the bug lands on vertex

the probability that the bug land on each vertex after

meters. So, we have

We construct the following table: 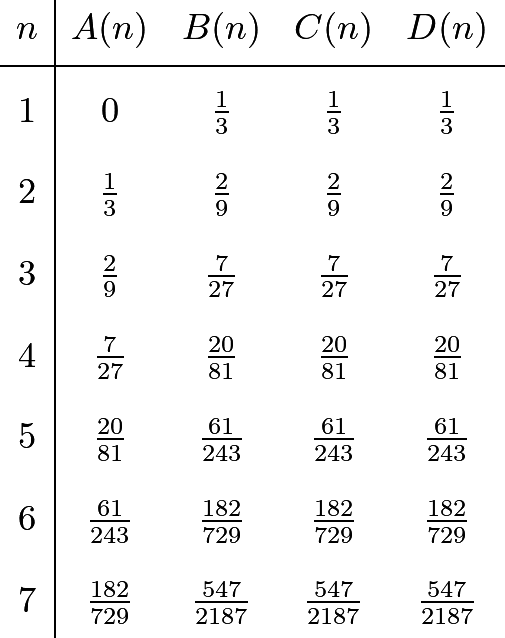 The generating function for a problem with this general form (

, so the generating function of interest for this problem is

. Our goal is to find the coefficients of every

and add them up before dividing by

. We can do this by applying a roots of unity filter.

. We have that if

From here, the desired probability is

th move, and use these smaller cycles to calculate the number of different ways the bug can end up back at

to be the number of paths of length

which start and end at

but do not pass through

the bug has three initial edges to pick from. From there, since the bug cannot return to

by definition, the bug has exactly two choices. This continues from the

nd move up to the

th move. The last move must be a return to

so this move is determined. So

at the end. Since

cannot be used, as on the

So we need to find the number of partitions of

We can calculate these and sum them up using our formula. Also, order matters, so we need to find the number of ways to arrange each partition:

Finally, this is a probability question, so we divide by

Here is a similar problem from another AIME test: 2003 AIME II Problem 13, in which we have an equilateral triangle instead.