Difference between revisions of "1988 AIME Problems/Problem 13"

are integers such that

The above uses the similarity between the Fibonacci recursion|recursive definition,

We can long divide and search for a pattern; then the remainder would be set to zero to solve for

Since the coefficient of

must be zero, this gives us two equations,

. Solving these two as above, we get that

There are various similar solutions which yield the same pattern, such as repeated substitution of

into the polynomial with a higher degree, as shown in Solution 6.

would be very tough, so let's try to divide using smaller degrees of

, we get the following systems of equations:

There is somewhat of a pattern showing up, so let's try

to verify. We get:

Now we begin to see that our pattern is actually the Fibonacci Numbers! Using the previous equations, we can make a general statement about

Also, noticing our solutions from the previous systems of equations, we can create the following statement:

as a factor, then

as a factor, we get that

be the polynomial such that

Clearly, the constant term of

is some coefficient. However, since

term, it must be true that

now. Notice that all we care about in finding

, and we see a nice pattern. The coefficients of

are just the Fibonacci sequence with alternating signs! Therefore,

denotes the 16th Fibonnaci number and

(the Golden Ratio) and

. These two must also be roots of

. Thus, we have two equations:

Subtract these two and divide by

Noting that the formula for the

are coprime, the solutions to this equation under the integers are of the form

, of which the only integral solutions for

, so the answer must be

. (Note that this solution would not be valid on an Olympiad or any test that does not restrict answers as integers between

so the roots of

must also be roots of

be a root of 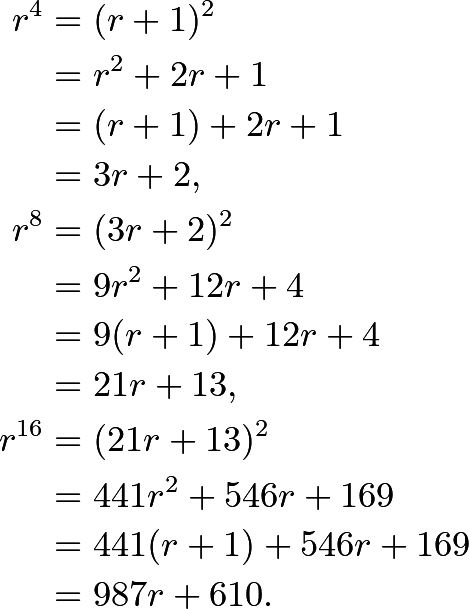 We rewrite the left side of

as a linear expression of

Since this linear equation has two solutions of

it must be an identity. Therefore, we have the following system of equations:

we multiply the first equation by

and multiply the second equation by

then subtract the resulting equations:

. Notice that the roots of

are also roots of

. Let these roots be

. We get the system

If we multiply the first equation by

and the second by

Now subtracting, we get

so the denominator becomes

. By difference of squares and dividing out

A simple exercise of Vieta's gets us