Difference between revisions of "1989 AIME Problems/Problem 9"

Taking the given equation modulo

By either Fermat's Little Theorem (FLT) or inspection, we get

By either the Chinese Remainder Theorem (CRT) or inspection, we get

so the possible values for 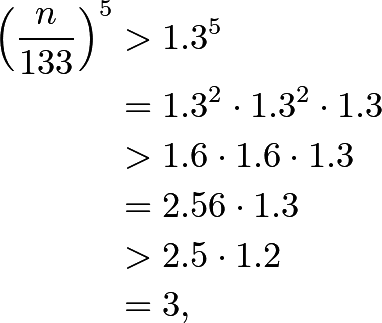 which arrives at a contradiction. Therefore, we conclude that

is even, since the LHS consists of two odd and two even numbers. By Fermat's Little Theorem, we know

Continuing, we examine the equation modulo

It is obvious that

so the only possibilities are

It quickly becomes apparent that

is much too large, so

We can cheat a little bit and approximate, since we are dealing with such large numbers. As above,

and it is easy to see that

so the last digit of

are all very close or equal to multiples of

as approximately equal to

must be close to

will obviously be too small, so we try

Bashing through the division, we find that

which is very close to

will not give any closer of an answer, given the rate that fifth powers grow, so we can safely assume that

In this solution we take advantage of the large numbers and utilize parity properties to give us a very good guess at the answer. The units digits of

respectively, so the units digit of

is even. Since we are dealing with enormous numbers,

should not be that far from

When to the power of

as the units digits. This further clues us that

so we start with

which is not that difficult. For

By the same reasoning, we get 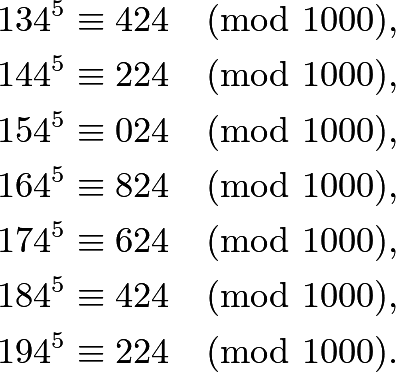 is obviously an overestimate. So, the answer is

on both sides to get

(by FLT). Finally, note that mod