During AMC testing, the AoPS Wiki is in read-only mode. No edits can be made.
AoPS Wiki
Resources Aops Wiki Difference between revisions of "1990 AIME Problems/Problem 8"

Difference between revisions of "1990 AIME Problems/Problem 8"

In a shooting match, eight clay targets are arranged in two hanging columns of three targets each and one column of two targets. A marksman is to break all the targets according to the following rules:

1) The marksman first chooses a column from which a target is to be broken.

2) The marksman must then break the lowest remaining target in the chosen column.

If the rules are followed, in how many different orders can the eight targets be broken? 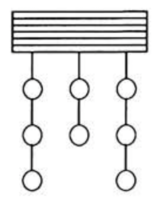 From left to right, suppose that the columns are labeled

respectively. We consider the string

We can count the letter arrangements of