are equilateral, and by symmetry, triangle

is isosceles and thus also equilateral. 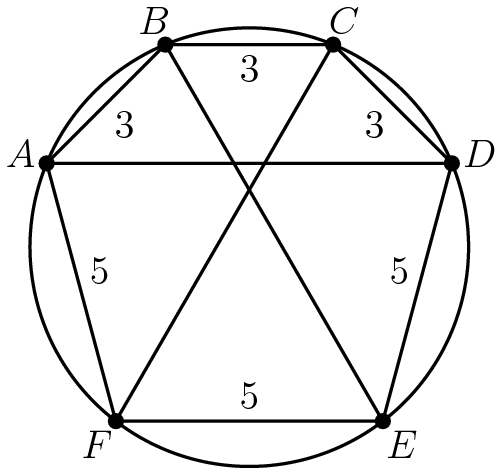 subtend the same arc, as do

All angle measures are in degrees. Let the first trapezoid be

. Then the second trapezoid is

is an isosceles trapezoid, we know that

(add up the angles),

, we can now use the Law of Sines to get:

, and we are given that

, but we need to find

Plugging in and solving, we see

be the desired length. One can use Parameshvara's circumradius formula, which states that for a cyclic quadrilateral with sides

is the semiperimeter. Applying this to the trapezoid with sides

, we see that many terms cancel and we are left with

Similar canceling occurs for the trapezoid with sides

, and since the two quadrilaterals share the same circumradius, we can equate: