During AMC testing, the AoPS Wiki is in read-only mode. No edits can be made.
AoPS Wiki
Resources Aops Wiki 1998 AJHSME Problems/Problem 24 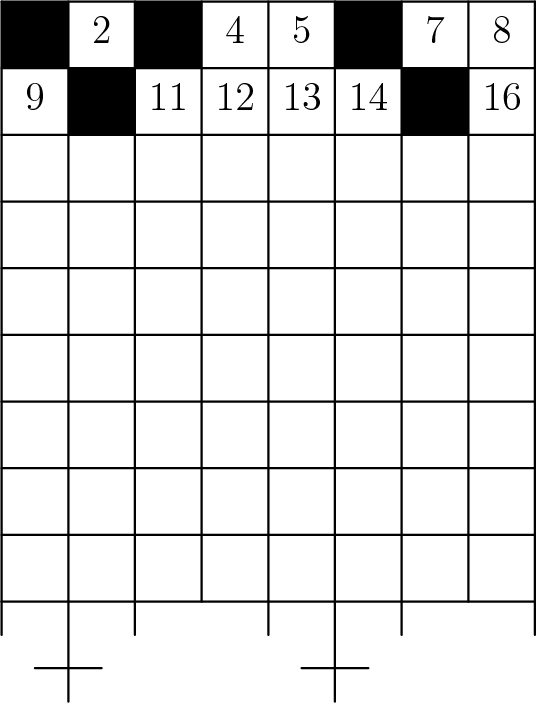 The numbers that are shaded are the triangular numbers, which are numbers in the form

for positive integers. They can also be generated by starting with

as in the description of the problem.

Squares that have the same remainder after being divided by

will be in the same column. Thus, we want to find when the last remainder, from

So, instead of adding

, we can effectively either add

if we are only concerned about remainders when divided by

Finally, a term with

is found, and checking, all numbers

are also on the right side of the list. This means the last term in our sequence is the first time that column

is shaded. There are

terms in the sequence, leading to an answer of

Note that the triangular numbers up to

. When you divide each of those numbers by

, all remainders must be present. We first search for number(s) that are evenly divisible by

; if two such numbers exist, we search for numbers that leave a remainder of

are even. That smaller list doesn't have any multiples of

must be the answer.

The numbers shaded are triangular numbers of the form

. For this number to be divisible by

, the numerator must be divisible by

. Since only one of

can be even, only one of them can have factors of

. Therefore, the first time the whole expression is divisible by

as the first time

. No other triangular number lower than that is divisible by

column on the checkerboard won't be filled until then. That gives

as the right answer.