During AIME testing, the AoPS Wiki is in read-only mode. No edits can be made.
AoPS Wiki
Resources Aops Wiki Difference between revisions of "2001 AIME I Problems/Problem 13"

Difference between revisions of "2001 AIME I Problems/Problem 13"

In a certain circle, the chord of a

centimeters long, and the chord of a

centimeters longer than the chord of a

The length of the chord of a 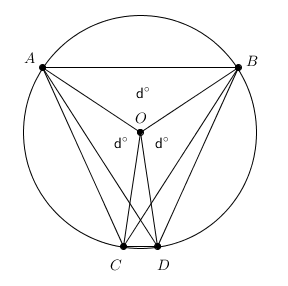 -degree arcs and one chord of one

-degree arc. The diagonals of this trapezoid turn out to be two chords of two

be the chords of the

be the chord of the

be equal to the chord length of the

-degree arc. Hence, the length of the chords,

-degree arcs can be represented as

, as given in the problem.

We can then apply the quadratic formula to find the positive root to this equation since polygons obviously cannot have sides of negative length.

be the circumradius. From the given information,

Dividing the latter by the former,

this is equivalent to

Using the quadratic formula, we find that the desired length is equal to

be the circumradius, and

be the length of 3d degree chord. Using the extended sine law, we obtain:

Dividing the second from the first we get

By the triple angle formula we can manipulate the third equation as follows: