During AIME testing, the AoPS Wiki is in read-only mode. No edits can be made.
AoPS Wiki
Resources Aops Wiki 2005 CEMC Gauss (Grade 7) Problems/Problem 24

On a circular track, Alphonse is at point

and Beryl is diametrically opposite at point

. Alphonse runs counterclockwise and Beryl runs clockwise. They run at constant, but different, speeds. After running for a while they notice that when they pass each other it is always at the same three places on the track. What is the ratio of their speeds? 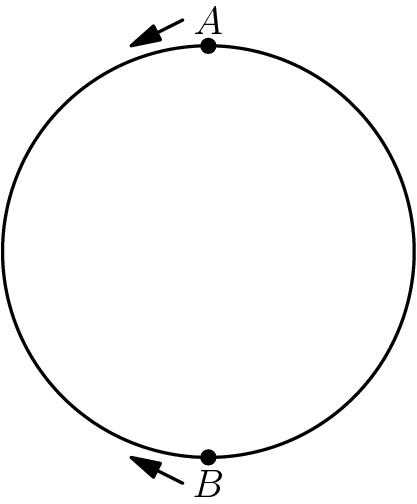 Since Alphonse and Beryl always pass each other at the same three places on the track and since they each run at a constant speed, then the three places where they pass must be equally spaced on the track. In other words, the three places divide the track into three equal parts. We are not told which runner is faster, so we can assume that Beryl is the faster runner. Start at one place where Alphonse and Beryl meet. (Now that we know the relative positions of where they meet, we do not actually have to know where they started at the very beginning.) To get to their next meeting place, Beryl runs farther than Alphonse (since she runs faster than he does), so Beryl must run

of the track while Alphonse runs

of the track in the opposite direction, since the meeting places are spaced equally at

intervals of the track. Since Beryl runs twice as far in the same length of time, then the ratio of their speeds is