, all six sides are congruent,

are right angles, and

are congruent. The area of the hexagonal region is

is a positive integer. Find the number of possible values for

be the product of the first 100 positive odd integers. Find the largest integer

be a permutation of

An example of such a permutation is

Find the number of such permutations.

When rolling a certain unfair six-sided die with faces numbered 1, 2, 3, 4, 5, and 6, the probability of obtaining face

has sides of length 1. Points

is equilateral. A square with vertex

has sides that are parallel to those of

and a vertex on

The length of a side of this smaller square is

Find the number of ordered pairs of positive integers

has a zero digit.

and has a positive slope, and line

and has a negative slope. Given that lines

Seven teams play a soccer tournament in which each team plays every other team exactly once. No ties occur, each team has a

chance of winning each game it plays, and the outcomes of the games are independent. In each game, the winner is awarded a point and the loser gets 0 points. The total points are accumilated to decide the ranks of the teams. In the first game of the tournament, team

The probability that team

finishes with more points than team

A sequence is defined as follows

is inscribed in a circle of radius 2. Extend

be the point on the circle that is collinear with

Given that the area of 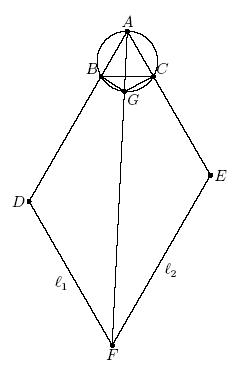 inclusive. Find the smallest positive integer n for which

are real numbers that satisfy: