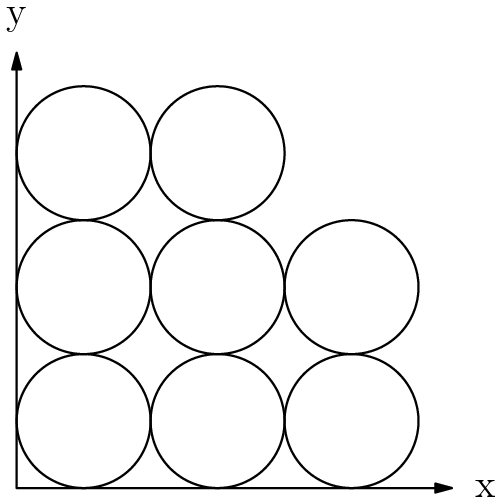 This problem looks daunting at a first glance, but we can make geometric inequality inferences by drawing lines. These inferences simplify the problem by removing sections of the total area, and reducing the sample size we work with. To begin, we can eliminate the possibility of the line intersecting the circle on the top left (call it circle A), or the circle on the bottom right (call it circle B). This is can be seen visually by drawing a line with slop 3 that is tangent to either of these circles. The area is clearly larger on one side; this can be proven by counting full circles. We can go on with the same mindset and eliminate the circle below circle A and the circle above circle B. By removing pairs of circles and proving the line will never intersect with them, we can safely work with whatever is remaining. By now you should have 4 circles making an L shape (waluigi style). Now the two biggest contenders for this method are the two circles on the bottom row. Using the same strategy, we can see that a line that goes through the tangent point of these two circles also goes through the tangent point of the other two circles. This clearly will cut the 4 circles into two regions of equal area. Using super advanced linear algebra we get: