be a point in the interior of

, respectively. The circumcircles of triangles

. The maximum possible area of

First, by the Law of Cosines, we have

be the circumcenters of triangles

, respectively, the above expression can be simplified to

be on the same side of

as the center and

as the radius, which is

. The shortest distance from

When the area of

is the maximum, the distance from

has to be the greatest. In this case, it's

. The maximum area of

From Law of Cosines on

are cyclic quadrilaterals, it follows that

Next, applying Law of Cosines on 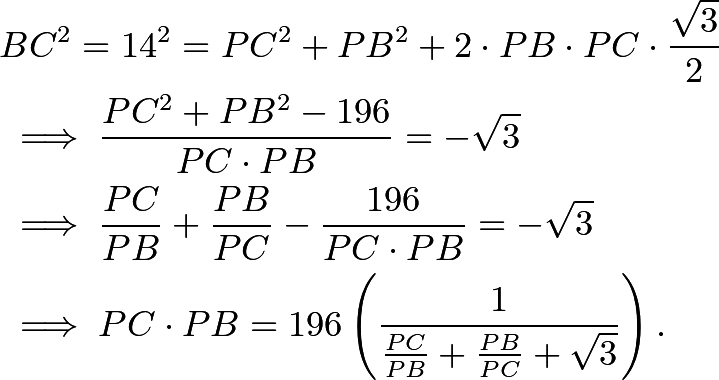 and the maximum area would be

Proceed as in Solution 2 until you find

. The locus of points

is a fixed arc from

will move along this arc as

) and we want to maximise the area of [

]. This means we want

to be farthest distance away from

as possible, so we put

in the middle of the arc (making

isosceles). We know that

, and so the answer is