During AMC testing, the AoPS Wiki is in read-only mode. No edits can be made.
AoPS Wiki
Resources Aops Wiki 2011 AMC 10A Problems/Problem 25

be a square region and

an integer. A point

First, notice that there must be four rays emanating from

that intersect the four corners of the square region. Depending on the location of

, the number of rays distributed among these four triangular sectors will vary. We start by finding the corner-most point that is

-ray partitional (let this point be the bottom-left-most point). We first draw the four rays that intersect the vertices. At this point, the triangular sectors with bases as the sides of the square that the point is closest to both do not have rays dividing their areas. Therefore, their heights are equivalent since their areas are equal. The remaining

rays are divided among the other two triangular sectors, each sector with

triangles of equal areas. Let the distance from this corner point to the closest side be

and the side of the square be

. From this, we get the equation

of the side length away from the two sides it is closest to. By moving

to the right, we also move one ray from the right sector to the left sector, which determines another

right and up to derive the set of points that are

-ray partitional. In the end, we get a square grid of points each

apart from one another. Since this grid ranges from a distance of

from one side to

from the same side, we have a

grid, a total of

-ray partitional points. To find the overlap from the

-ray partitional, we must find the distance from the corner-most

-ray partitional point to the sides closest to it. Since the

apart from each other, we can deduce that the

apart from each other. To find the overlap points, we must find the common divisors of

. Therefore, the overlapping points will form grids with points

away from each other respectively. Since the grid with points

away from each other includes the other points, we can disregard the other grids. The total overlapping set of points is a

We may assume that the square 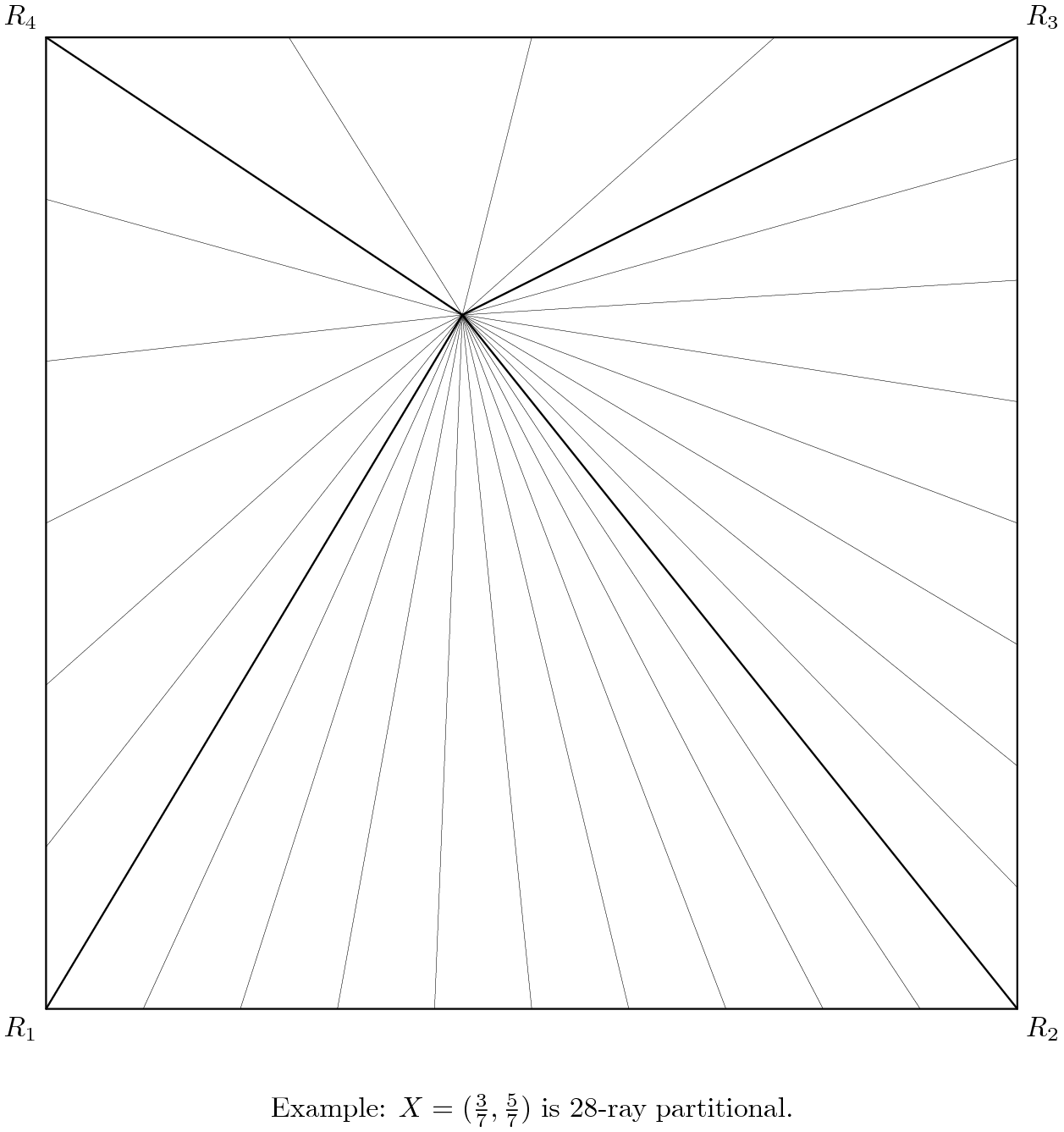 By definition, there exist

triangles of equal area, and

of these rays intersect the vertices of

be the number of triangles that share a side with

Let the common area of the triangles be

. Each of the triangles that share a side with

be integers such that

Thus we have derived a necessary condition for

satisfies the above condition, then it is

-ray partitional since we can define

To count the points that are

-ray partitional, it suffices to count the ordered pairs of rationals

We need to subtract the points that are

-ray partitional; those are the ordered pairs of rationals

Hence the answer is