Difference between revisions of "2011 AMC 10B Problems/Problem 25"

be a triangle with side lengths

are the points of tangency of the incircle of

is a triangle with side lengths

if it exists. What is the perimeter of the last triangle in the sequence

By constructing the bisectors of each angle and the perpendicular radii of the incircle the triangle consists of 3 kites. 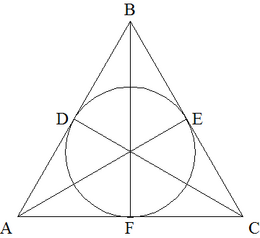 for the first triangle.)

Subbing in gives that

). All additional triangles will differ by one as the solutions above differ by one so this process can be repeated indefinitely until the side lengths no longer form a triangle.

but these lengths do not make a triangle as

Likewise, you could create an equation instead of listing all the triangles to

. The sides of a triangle

Hence, the first triangle which does not exist in this sequence is

Proceeding similarly to the first solution, we have that sides of each triangle are of the form

. Also, note that the perimeter of each triangle is half of the previous one. In order for the triangle to not exist, it must not satisfy the triangle inequality, meaning that

. Then, the perimeter would be

. So, to have a proper triangle, we have

. The first triangle to not work would have perimeter

, thus the answer is