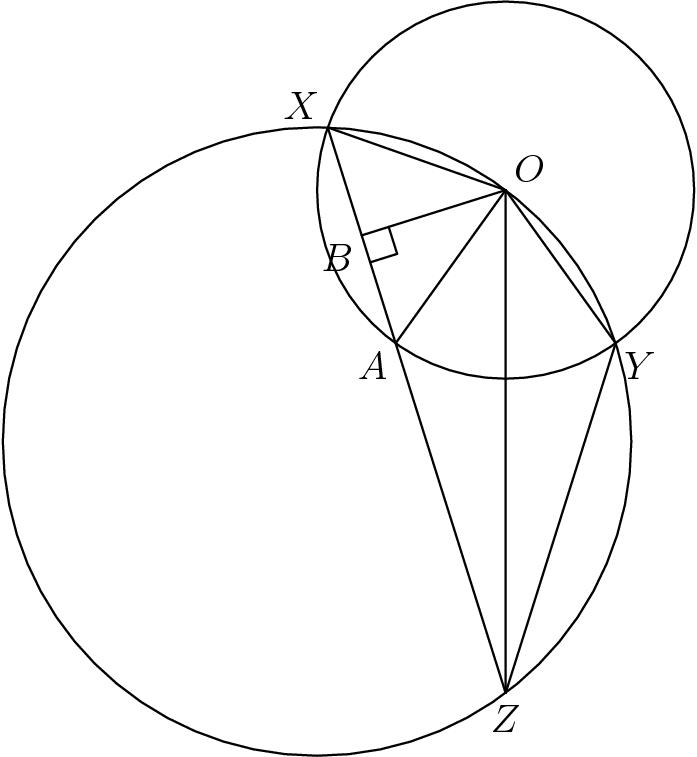 , the law of cosines on triangle

is cyclic, the measure of angle

. We apply the law of cosines to triangle

Let us call the

the radius of circle

. Both of these triangles have the same circumcircle (

). From the Extended Law of Sines, we see that

. We will now apply the Law of Cosines to

and get the equations

, this is a system of two equations and two variables. Solving for

Instead of using the Extended Law of Sines, you can note that

, since the angles inscribe arcs of the same length.

. Pulling an altitude to

is cyclic, we have

. Consider an inversion about

is isosceles, thus the altitude from

above. By the Pythagorean Theorem,

Use the diagram above. Notice that

. Consider the power of point

with respect to Circle

Solution 7 (Only Law of Cosines)

are the same length, which is also the radius

we want. Using the law of cosines on

. Using the law of cosines on

. Solving for theta on the first equation and substituting gives

We first note that

is the circumcircle of both

. Thus the circumradius of both the triangles are equal. We set the radius of

, and noting that the circumradius of a triangle is

and that the area of a triangle by Heron's formula is

as the semi-perimeter we have the following,

This gives us 2 values for

Now notice that we can apply Ptolemy's theorem on

Here we substitute our

. Notice that the latter of the

cases does not satisfy the triangle inequality for

. But the former does thus our answer is