is the length of the period of the repeating decimal expansion. What is the sum

and we can see that for each

combinations so the above sum is equivalent to:

we note that the sequence starts repeating at 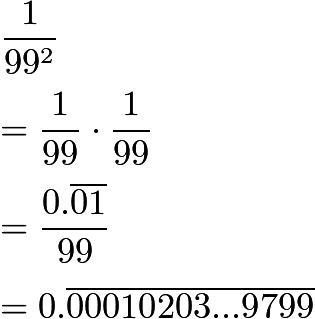 So, the answer is

There are two things to notice here. First,

has a very simple and unique decimal expansion, as shown. Second, for

to itself produce a repeating decimal,

has to evenly divide a sufficiently extended number of the form

. This number will have

. The enormity of this number forces us to look for a pattern, and so we divide out as shown. Indeed, upon division (seeing how the remainders always end in "501" or "601" or, at last, "9801"), we find the repeating part

. If we wanted to further check our pattern, we could count the total number of digits in our quotient (not counting the first three): 195. Since

, multiplying by it will produce either

extra digits, so our quotient passes the test.