Erin the ant starts at a given corner of a cube and crawls along exactly 7 edges in such a way that she visits every corner exactly once and then finds that she is unable to return along an edge to her starting point. How many paths are there meeting these conditions? 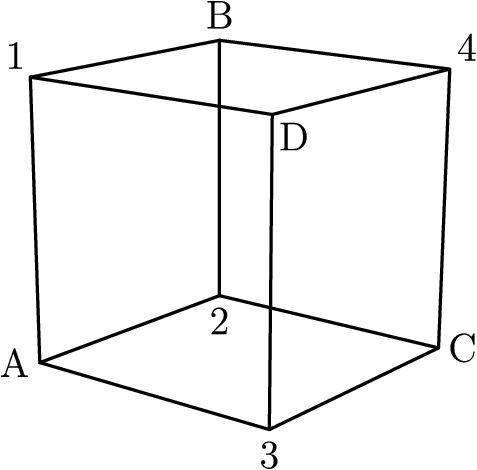 We label the vertices of the cube as different letters and numbers shown above. We label these so that Erin can only crawl from a number to a letter or a letter to a number (this can be seen as a coloring argument). The starting point is labeled

If we define a "move" as each time Erin crawls along a single edge from 1 vertex to another, we see that after 7 moves, Erin must be on a numbered vertex. Since this numbered vertex cannot be 1 unit away from

(since Erin cannot crawl back to

), this vertex must be

Therefore, we now just need to count the number of paths from

. To count this, we can work backwards. There are 3 choices for which vertex Erin was at before she moved to

, and 2 choices for which vertex Erin was at 2 moves before

. All of Erin's previous moves were forced, so the total number of legal paths from

. Because Erin can not return back to its starting point, he can not be on

moves, the sum of all the coordinates has to be odd. Thus, Erin has to be at

. Now, we draw a net and see that there are

choices for the first move,

for the second, and the rest are forced. Thus the answer is