Difference between revisions of "2015 AMC 12B Problems/Problem 19" 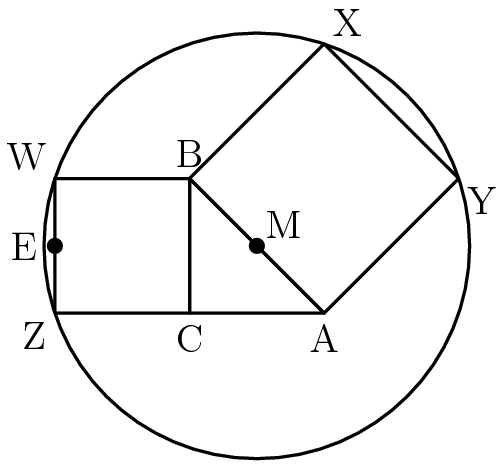 and finding their intersection point. This point happens to be the midpoint of

, the hypotenuse. Let this point be

. To find the radius, determine

first. Using the Pythagorean theorem, we find that 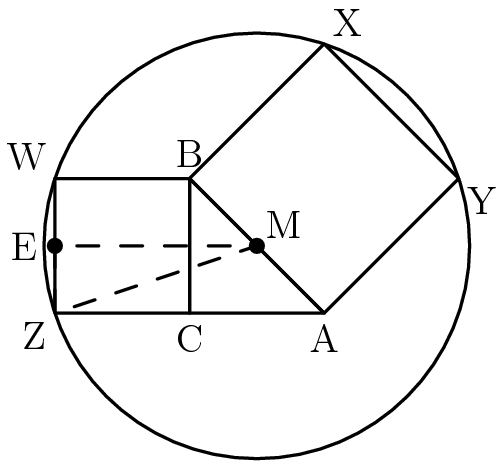 , and we consider right triangle

. By the Pythagorean theorem, we have that

. Expanding this equation, we get that

. Thus the perimeter is

The center of the circle on which

lie must be equidistant from each of these four points. Draw the perpendicular bisectors of

. Note that the perpendicular bisector of

and passes through the midpoint of

. Therefore, the triangle that is formed by

, and the point at which this perpendicular bisector intersects

must be similar to

, and the ratio of a side of the smaller triangle to a side of

is 1:2. Consequently, the perpendicular bisector of

passes through the midpoint of

. The perpendicular bisector of

must include the midpoint of

as well. Since all points on a perpendicular bisector of any two points

, the center of the circle must be the midpoint of

Now the distance between the midpoint of

, which is equal to the radius of this circle, is

. Then the distance between the midpoint of

, also equal to the radius of the circle, is given by

(the ratio of the similar triangles is involved here). Squaring these two expressions for the radius and equating the results, we have

cannot be equal to 12, the length of the hypotenuse of the right triangle, we can divide by

. The length of other leg of the triangle must be

. Thus, the perimeter of the triangle is

In order to solve this problem, we can search for similar triangles. Begin by drawing triangle

. Because we are given points

lie on a circle, we can conclude that

and extend it through a point

. Now, we must do some angle chasing to prove that

is a straight line, and we know

is a right angle. Therefore,

is a right angle and thus,

is a right angle. Sum

. We can set up an equation:

, which we omit. The perimeter of the triangle is

satisfies the equation because of Pythagorean theorem, so

is an isosceles right triangle, then

is the diameter of the circumcircle of

forms a right angle with

is also the diameter of the circumcircle of

is an isosceles triangle.

is isosceles, then its legs have length

, these two angles inscribe the semicircle defined by diameter

is a square), we can find that

Now, we can see that

to complete the full

is and isosceles right triangle, and

. So Our answer is

We see a circle and little information of position of the shapes inside the triangle, so we think of things associated with circles and think of cyclic quads. We then notice that quadrilateral

is cyclic. Then we see that

. We can see that

. Then we can see that

We can verify with the cosine addition identity that

motivates this). By law of cosine's,

equal to the second: