During AMC testing, the AoPS Wiki is in read-only mode. No edits can be made.
AoPS Wiki
Resources Aops Wiki 2017 AMC 12A Problems/Problem 25

at random, independently of the other choices. Let

be the product of the

numbers selected. What is the probability that

It is possible to solve this problem using elementary counting methods. This solution proceeds by a cleaner generating function.

both lie on the imaginary axis and each of the

and angle of odd multiples of

. Now we count the number of good combinations.

We first consider the lengths. When we multiply 12 complex numbers together, their magnitudes multiply. Suppose we have

; then we must have

will take care of the length of the product; now we need to deal with the angle.

, we see that the angles we have available are

, where we must choose exactly 8 angles from the set

and exactly 4 from the set

. If we found a good combination where we had

, then the amount this would contribute to our count would be

. We want to add these all up. We proceed by generating functions.

The expansion will be of the form

. Note that if we reduced the powers of

and fished out the coefficient of

(and then multiplied by

) then we would be done. Since plugging in

's, we do that right away. The expression then becomes

denote the coefficient of

. We use the roots of unity filter, which states

, so we only need to find the average of the 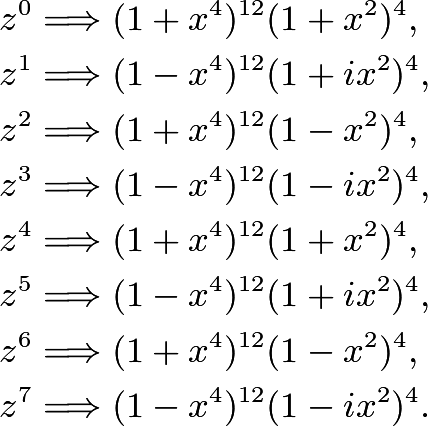 makes all of the above zero except for

. Now the answer is simply

, we can give a bijection between cases where

, so we'll just find the probability that

in the end. Multiplying the hexagon's vertices by

, so the probability that

remains the same if we only select our

's at random from

is real, we must either choose

times. This gives us a total of

, and hence the final result is

We use generating functions and a roots of unity filter. Notice that all values in

are eighth roots of unity multiplied by a constant. Let

be a primitive eighth root of unity (

, we must have that

, so eight of the

and the other four must belong to

So, we write the generating function

to describe the product. Note that this assumes that the

come first, so we will need to multiply by

at the end. We now apply a roots of unity filter to find the sum of the coefficients of the exponents that are

, or equivalently the coefficients of the powers that are multiples of

of the following function:

, and all of the rest are equal to

. But wait! We need to multiply by

We can write the points in polar form

Note that when multiplying complex numbers, the

s multiply and the

s add, and since

By binomial distribution, the probability of this occurring is

must be congruent to

and by using simple symmetry, the probability of the aforementioned occurring is

is even for all

and the number of ordered quadruples

is the same for all

again by using symmetry. Thus, our probability is