Difference between revisions of "2018 AIME I Problems/Problem 10"

The wheel shown below consists of two circles and five spokes, with a label at each point where a spoke meets a circle. A bug walks along the wheel, starting at point

be the number of paths with

steps that begin and end at point 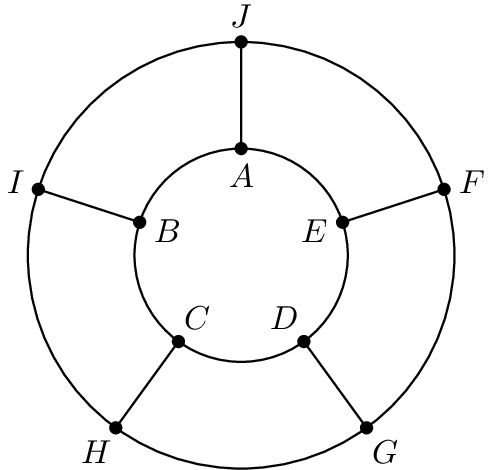 We divide this up into casework. The "directions" the bug can go are

signal going clockwise (because it has to be in the inner circle), an

signal going counter-clockwise, and an

switching between inner and outer circles. An example string of length fifteen that gets the bug back to

. For the bug to end up back at

, the difference between the number of

's must be a multiple of

's.
There is clearly

way for this to happen.

's.
We split this case up into several sub-cases based on the number of

's.
Notice that the number of ways to order the

's are independent assortments because the

's must be in the "even" spaces between

places to put the

's. We use stars and bars to get an answer of

.
Similarly and by using stars and bars, we get an amount of

All the other sub-cases are similar, with a total of

's.
This case is similar to the other case.
Here is an example of a sub-case for this case.

ways to do this.

We can see now that the pattern is going to be

So, the total number of ways is

denotes a move which is either clockwise or outward along a spoke. (The proof of this basically boils down to the fact that which one depends on whether the bug is on the inner wheel or the outer wheel.) Now the condition that the bug ends at A implies that the difference between the number of

s and the number of

s is a multiple of

, and so we must have either

. This implies the answer is

15 O: Impossible since the string has to end with an I.

This brings us an answer of