. Moreover, the pentagon has an inscribed circle (a circle tangent to each side of the pentagon). Find the area of

. Let the center of the incircle be

, by SAS we can proof triangle

, then by AAS we have triangle

. So by law of cosine in triangle

, solved it gives us

divides it into two triangles with side lengths 9, 12, 15, so the area of triangle

Suppose that the circle intersects

. Then we can solve for each individually.

. To find the radius, we notice that

is real. Expanding, we get:

. On the last expanding, we only multiply the reals with the imaginaries and vice versa, because we only care that the imaginary component equals 0.

must equal 4, as r cannot be negative or be approximately equal to 1. Thus, the area of

. The area of a regular pentagon with side lengths

is slightly greater than

is slightly less than

is then slightly greater than

. We will approximate that to be

. The area is now roughly

, but because the actual pentagon is not regular, but has the same perimeter of the regular one that we are comparing to we can say that this is an overestimate on the area and turn the

thus turning the area into

is a multiple of the semiperimeter

, we can safely say that the answer is most likely

be the inscribed circle,

be its center, and

be its radius. The area of

is equal to its semiperimeter,

, so the problem is reduced to finding

be the length of the tangent segment from

, with a total of

be the point where

. The sum of the internal angles in polygons 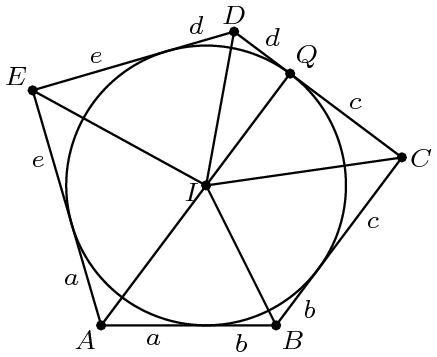 can be found as follows. Note that

corresponds to a five-pointed star, which is not convex. Indeed, if

are acute, which cannot happen in a convex pentagon. Thus

. The requested area is

. By the Tangent Addition Formula,

. Then the solution proceeds as in Solution 5.

as in Solution 5. Note that

Simplifying this equation gives the same quadratic equation in

Notation shown on diagram. As in solution 5, we get

The radius of incircle

It is the same radius, therefore

Then the solution proceeds as in Solution 5.