During AMC testing, the AoPS Wiki is in read-only mode. No edits can be made.
AoPS Wiki
Resources Aops Wiki 2020 AMC 12B Problems/Problem 10

. This triangle is iscoceles because

are both radii of

We can now use Law of Cosines on

to find the length of

and subtract it from the length of

, the double angle formula tells us that

By Pythagorean theorem, we find that

in the Cartesian plane such that the center lies on the origin. Then we can easily find the equation for

, because it is not translated and the radius is

. The slope of the line passing through these two points is

. This gives us the line passing through both points as

We substitute this into the equation for the circle to get

. The roots of this quadratic are

, so we only want

We plug this back into the linear equation to find

. Finally, we use distance formula on

Solution 3 (Power of a Point)

. By Power of a Point, we have

, and we can easily find

by the Pythagorean Theorem, which gives us

. Our equation is now

, thus our answer is

as the center and draw segment

Call the midpoint of 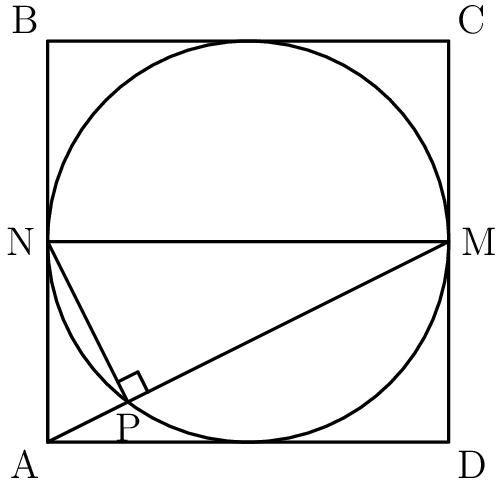 . Now we just need to find

Label the midpoint of

by the Inscribed Angle Theorem.

and applying the Pythagorean Theorem to right

Finally, dividing both sides by

then rationalizing the denominator, we get