During AMC testing, the AoPS Wiki is in read-only mode. No edits can be made.
AoPS Wiki
Resources Aops Wiki 2021 AIME II Problems/Problem 12

Revision as of 17:27, 19 June 2021 by MRENTHUSIASM (talk | contribs) (→‎Solution 1 (Law of Cosines): The solution not only uses the Law of Cosines, but also the Sines formula. So, the revised title is a bit more appropriate.)
(diff) ← Older revision | Latest revision (diff) | Newer revision → (diff)

A convex quadrilateral has area

in that order. Denote by

the measure of the acute angle formed by the diagonals of the quadrilateral. Then

four vertices of this quadrilateral, such that

the point that two diagonals

meet at. To simplify the notation, we denote

First, we use the triangle area formula with sines to write down an equation of the area of the quadrilateral

Second, we use the law of cosines to establish four equations for four sides of the quadrilateral

Therefore, by writing this answer in the form of

Therefore, the answer to this question is

Since we are asked to find

separately and use their values to get

. We can start by drawing a diagram. Let the vertices of the quadrilateral be

is the acute angle formed between the intersection of the diagonals

We are given that the area of quadrilateral

. We can express this area using the areas of triangles

. Since we want to find

, we can represent these areas using

. Therefore it follows that:

. Now we need to find

. Using the Law of Cosines on each of the four smaller triangles, we get following equations:

. We can substitute this value into our equations to get:

Since we have figured out

Therefore our answer is

Let the brackets denote areas. We get 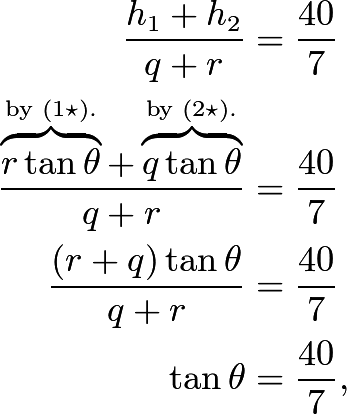