denote the set of all obtuse triangles that have area

and two sides with lengths

is nonempty, but all triangles in

are congruent, is an interval

We start by defining a triangle. The two small sides MUST add to a larger sum than the long side. We are given

as the sides, so we know that the

rd side is between

, exclusive. We also have to consider the word OBTUSE triangles. That means that the two small sides squared is less than the

rd side. So the triangles' sides are between

exclusive, and the larger bound is between

, exclusive. The area of these triangles are from

on the first "small bound" and the larger bound is between

is our first equation, and

nd equation. Therefore, the area is between

are the side-lengths of an obtuse triangle with

then both of the following must be satisfied:

For one such obtuse triangle, let

be its area. We apply casework to its longest side:

Case (1): The longest side has length

Case (2): The longest side has length

It is possible for noncongruent obtuse triangles to have the same area. Therefore, all such positive real numbers

are in exactly one of

By the exclusive disjunction, the set of all such

We have the diagram below.

We proceed by taking cases on the angles that can be obtuse, and finding the ranges for

is obtuse, then we have that

, and the area of the triangle is strictly decreasing as

. This can be observed from

Then, we note that if

is obtuse, we have

. This is because we get

increases by the same argument as before.

cannot be obtuse since

Now we have the intervals

for the cases where

are obtuse, respectively. We are looking for the

that are in exactly one of these intervals, and because

, the desired range is

Note: Archimedes15 Solution which I added an answer here are two cases. Either the

are around an obtuse angle or the

are around an acute triangle. If they are around the obtuse angle, the area of that triangle is

. Note that for the other case, the side lengths around the obtuse angle must be

. Using the same logic as the other case, the area is at most

to get the right answer

Without the loss of generality, we consider

on only one side of

As shown below, all locations for

is an obtuse triangle are indicated in red, excluding the endpoints.

For any fixed value of

is fixed. We need obtuse

to be unique, so there can only be one possible location for

As shown below, all possible locations for

are on minor arc 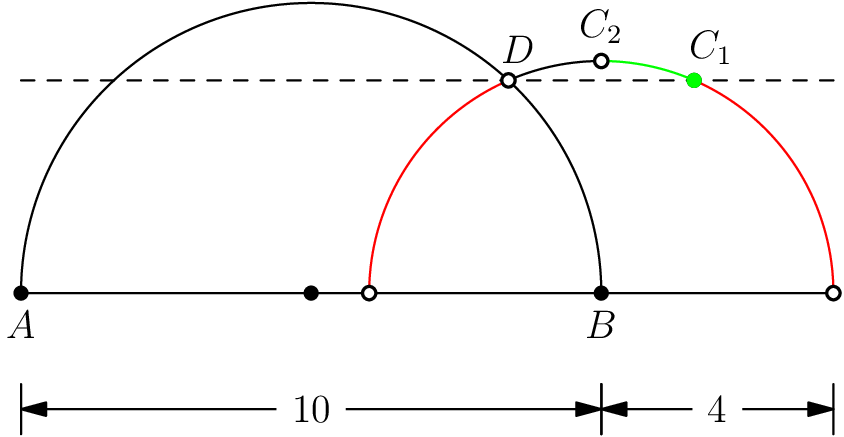 Finally, the set of all such

Let a triangle in

. We will proceed with two cases:

is obtuse, then, if we imagine

; therefore, the area of the triangle will fall in the range of

is obtuse. Then, if we imagine

. Therefore, the area of the triangle will fall in the range of

, there will exist two types of triangles in

obtuse; the other type with

cannot be obtuse, so therefore, there is only one type of triangle - the one in which

is obtuse. Also, if

, no triangle exists with lengths

is in the range

Alternatively, refer to Solution 5 for the geometric interpretation. 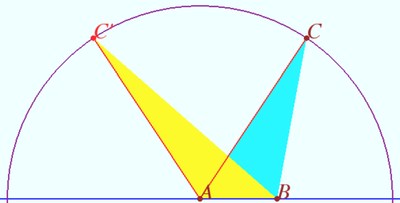 Let's rephrase the condition. It is required to find such values of the area of an obtuse triangle with sides 4 and 10, when there is exactly one such obtuse triangle. In the diagram,

The largest area of triangle with sides

for a right triangle with legs

The diagram shows triangles with equal heights. The yellow triangle

the area is equal to

In the interval, the blue triangle

is acute-angled, the yellow triangle

is obtuse-angled. Their heights and areas are equal. The condition is met.

If the area is less than

both triangles are obtuse, not equal, so the condition is not met.