Difference between revisions of "2021 AIME I Problems/Problem 15"

is an upward-opening parabola with the vertex at

is a rightward-opening parabola with the vertex at

We consider each condition separately:

By a quick sketch, we have two subconditions:

For Condition 1, we obtain

by taking the intersection of Subconditions A and B.

Taking the intersection of Conditions 1 and 2 produces

. Multiply the first equation by

and sum, we see that

. Completing the square gives us

; this explains why the two parabolas intersect at four points that lie on a circle*. For the upper bound, observe that

For the lower bound, we need to ensure there are

intersections to begin with. (Here I'm using the un-translated coordinates.) Draw up a graph, and realize that two intersections are guaranteed, on the so called "right branch" of

. As we increase the value of

does not work because the "leftmost" point of

which lies to the right of

, which is on the graph

. While technically speaking this doesn't prove that there are no intersections (why?), drawing the graph should convince you that this is the case. Clearly,

does work because the two graphs intersect at

, and by drawing the graph, you realize this is not a tangent point and there is in fact another intersection nearby, due to slope. Therefore, the answer is 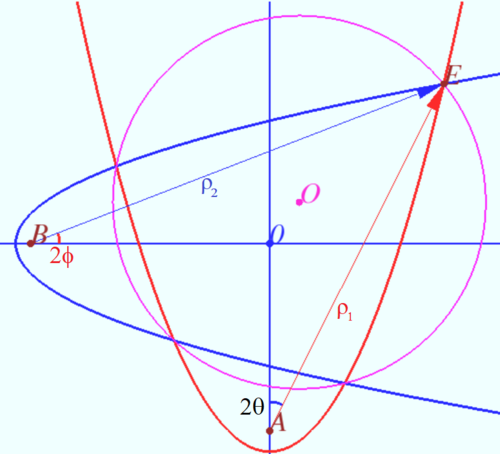 Let the axes of two parabolas be perpendicular, their focal parameters be

. Suppose that these parabolas intersect at four points.

Then these points lie on the circle centered at point

Let's introduce a coordinate system with the center at the point of intersection of the axes. Let the first (red) parabola have axis

Abscissa of the point of intersection is

Ordinate of the point of intersection is

After simple transformations, we get

Hence, any intersection point has the same distance

The vertex of the second parabola is point

can be on the parabola

or below the point of the parabola with the same abscissa. So