respectively. The graphs of both polynomials pass through the two points

whose representation in base nine is

are (not necessarily distinct) digits.

The angle bisectors of

and the angle bisectors of

Find the number of ordered pairs

of positive integers not exceeding

Find the number of ordered pairs of integers

such that the sequence

is strictly increasing and no set of four (not necessarily consecutive) terms forms an arithmetic progression.

be distinct integers from

The minimum possible positive value of

meet in six points---two points for each pair of circles. The three intersection points closest to the vertices of

Ellina has twelve blocks, two each of red (

). Call an arrangement of blocks

if there is an even number of blocks between each pair of blocks of the same color. For example, the arrangement

is even. Ellina arranges her blocks in a row in random order. The probability that her arrangement is even is

are mutually externally tangent. A plane intersects the spheres in three congruent circles centered at

respectively, and the centers of the spheres all lie on the same side of this plane. Suppose that

be a parallelogram with

A circle tangent to sides

as shown. Suppose that 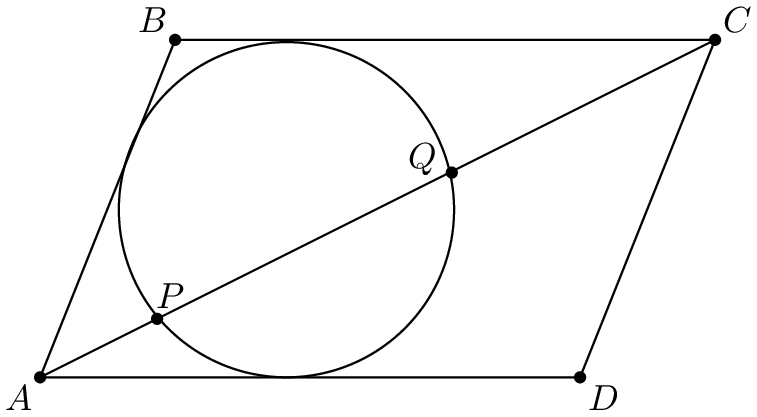 where at least one of the digits

be the number of distinct numerators obtained when numbers in

are written as fractions in lowest terms. For example, both

are counted among the distinct numerators for numbers in

on one of its sides, call line

respectively, and suppose that the splitting lines of

Find the perimeter of

be positive real numbers satisfying the system of equations: