Ceva's Theorem is a criterion for the concurrence of cevians in a triangle.

be a triangle, and let

be points on lines

concur iff if and only if

where lengths are directed. 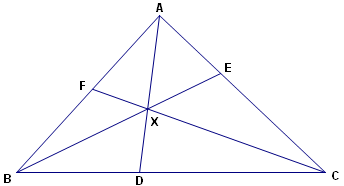 (Note that the cevians do not necessarily lie within the triangle, although they do in this diagram.)

We will use the notation

to denote the area of a triangle with vertices

. We note that triangles

have the same altitude to line

. The same is true for triangles

. We have proven that

must satisfy Ceva's criterion. This means that

concur if and only if

The converse follows by an argument almost identical to that used for the first form of Ceva's Theorem. ∎