During AMC testing, the AoPS Wiki is in read-only mode. No edits can be made.
AoPS Wiki
Resources Aops Wiki Difference between revisions of "Getting Started With Python Programming"

Difference between revisions of "Getting Started With Python Programming"

Here we see a number of familiar operations: + for add, - for subtraction, * for multiplication, and / for division. The last operation shown in the example, denoted by **, happens to be exponentiation. One neat feature to note about Python is that it can store arbitrarily large numbers (limited by the amount of memory your computer has). Trying some hefty exponentiation, we can see that we can compute with some pretty big numbers such as

While Python can make for a pretty good calculator, it can do a whole lot more. One example is when dealing with strings as follows:

Here we are concatenating the three strings "python", "is", and "cool" by using the + operator. Notice that previously we used + to add numbers but now with strings, Python concatenates them! You may also note that the output of the operation gives us a string with single quotes around it. In Python, you are able to use single quotes or double quotes to denote a string. You can use them interchangeably.

As a final example, we can even write code in the Python Shell that extends beyond a single line as shown below. We also see our first example of a

Take some time to play around with the Python Shell. You'll want to go through a more extensive introduction to programming to learn the full extent of what you can do with Python, but you can still do some pretty nifty stuff by just playing around.

The IDLE Text Editor and Your First Python Program

For most programming needs, you'll want to edit your program in a separate document and then run it. In the file menu click on New Window which should give you a blank document with the title "Untitled" as shown below:

To get acquainted with the text editor, let's write our first Python program! We'll write a program to solve the | first Euler Project problem which asks: 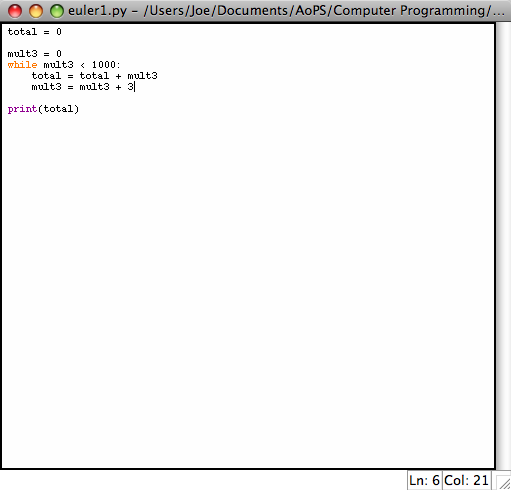 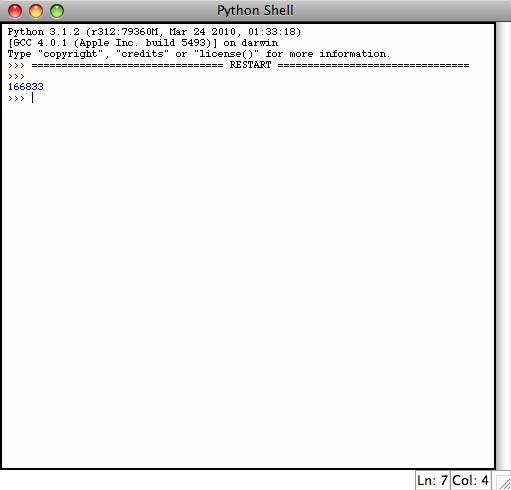