is the side opposite

In the diagram below, circle 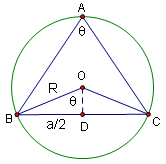 This picture could be replaced by an asymptote drawing. It would be appreciated if you do this.

The formula for the area of a triangle is:

Multiplying the equation by