During AMC testing, the AoPS Wiki is in read-only mode. No edits can be made.
AoPS Wiki
Resources Aops Wiki Difference between revisions of "Vieta's Formulas"

Difference between revisions of "Vieta's Formulas"

Vieta's Formulas, otherwise called Viète's Laws, are a set of equations relating the roots and the coefficients of polynomials.

Vieta's Formulas were discovered by the French mathematician François Viète. Vieta's Formulas can be used to relate the sum and product of the roots of a polynomial to its coefficients. The simplest application of this is with quadratics. If we have a quadratic

, then we know that we can factor it as:

(Note that the first term is

.) Using the distributive property to expand the right side we now have

We know that two polynomials are equal if and only if their coefficients are equal, so

We can state Vieta's formulas more rigorously and generally. Let

be a polynomial of degree

, where the coefficient of

. As a consequence of the Fundamental Theorem of Algebra, we can also write

are the roots of

. We thus have that

Expanding out the right-hand side gives us

in this expression will be the

-th elementary symmetric sum of the

We now have two different expressions for

. These must be equal. However, the only way for two polynomials to be equal for all values of

is for each of their corresponding coefficients to be equal. So, starting with the coefficient of

More commonly, these are written with the roots on one side and the

-th elementary symmetric sum, then we can write those formulas more compactly as

Basic proof: This has already been proved earlier, but I will explain it more. If we have

. Now expanding the left side, we get:

on the right hand side and we get:

Looking at the two sides, we can quickly see that the coefficient

is the actual sum of roots, however. Therefore, it makes sense that

. The same proof can be given for

Note: If you do not understand why we must divide by

, try rewriting the original equation as

For a polynomial of the form 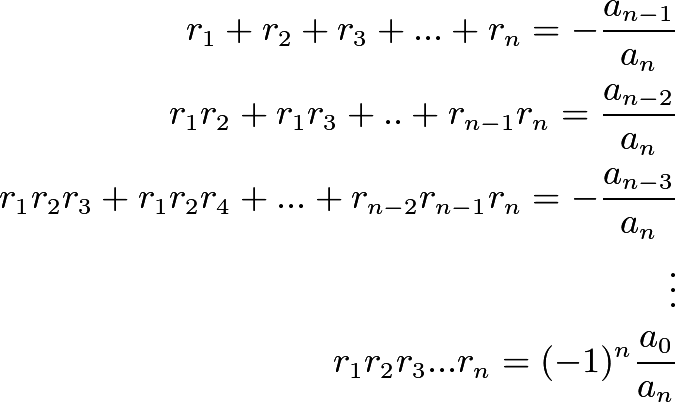 These formulas are widely used in competitions, and it is best to remember that when the

roots are taken in groups of

is taken in groups of 1 and

is taken in groups of

), this is equivalent to