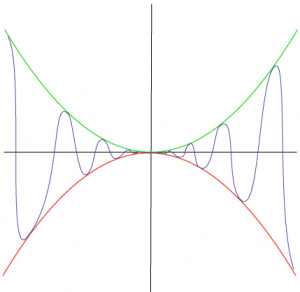 . The limit is not normally defined, because the function oscillates infinitely many times around 0, but it can be evaluated with the Squeeze Theorem as following. Create two functions,

. It is easy to see that around 0, the function in question is squeezed between these two functions, and the limit as both of these approach 0 is 0, so