The Prime Number Theorem (PNT) is one of the most celebrated results in analytic number theory. Indeed, it is possibly the most famous major result in all of number theory, with the exception of Fermat's Last Theorem. (Fortunately, the proof is easier, though still non-trivial!) It gives an asymptotic formula for the distribution of the prime numbers; specifically, it states that the functions

are asymptotically equivalent, where

is the number of primes less than or equal to

. In other words, it states that

Gauss conjectured the theorem as early as 1793, in terms of the logarithmic integral, which is asymptotically equivalent to

. Legendre conjectured in 1798 that for some constants

In 1808 he refined his conjecture to

does not seem to tend to this value, but its actual asymptotic behavior is apparently unknown.)

In 1850, Chebyshev proved that for sufficiently large

and he was able to give

. To this day, it remains unsolved.

In 1892, Sylvester was able to improve Chebyshev's bounds with

. However, his methods did not seem likely to yield better bounds.

Finally, in 1896, Jacques Hadamard and Charles-Jean de la ValÎée Poussin independently proved that the zeta function has no zeros on the line

, and from this deduced the prime number theorem. Their proofs were somewhat long; Hadamard's paper was some 20 pages long. De la Vallée Poussin's proof that

has no zeros was about 25 pages long; Hadamard's proof was essentially the modern version, though de la Vallée Poussin and Mertens later simplified it. The proof that this statement implied the prime number theorem remained long for some time.

In 1948, Alte Selberg and Paul Erdős simultaneously found "elementary" proofs of the prime number theorem. Unfortunately, these proofs are still much longer than the shortest proofs of today that use complex analysis.

Finally, in 1980, D.J. Newman found a theorem with a short proof that provided a much simpler link between the zeta function and the prime number theorem. This is essentially the proof given here.

, and the Tauberian theorem due to Newman. The rest of the theorem's proof is comparatively straightforward, though still non-trivial. We do not prove those results in this article, but instead refer to their proofs here and Newman's Tauberian Theorem.

We use the Riemann zeta function, which is defined as

, where it has a simple pole of residue 1.

As discussed here, the function

extends to the set

Thus we may define the function

has no zeros on the line

is holomorphic on the set

Proof. We rely on a tauberian theorem due to Newman. 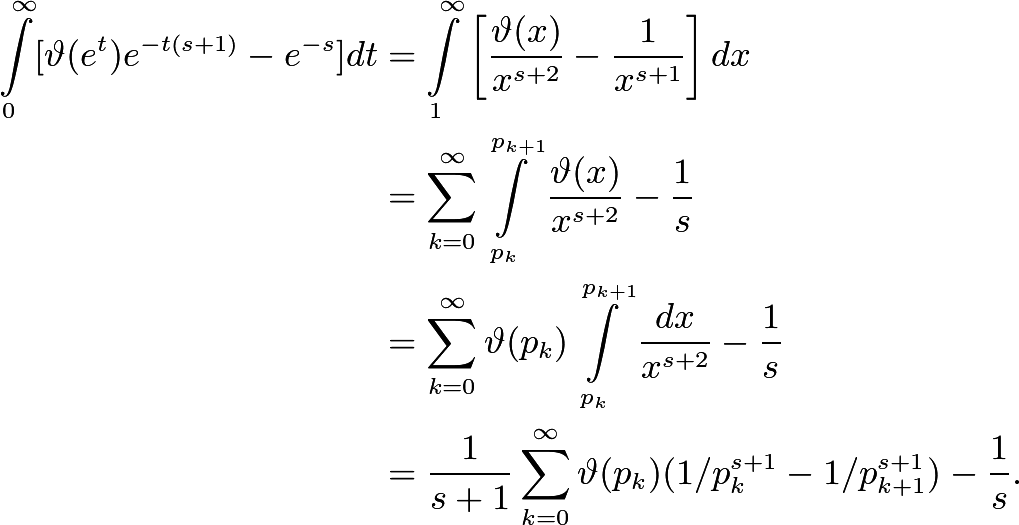 Now, by the Abel Summation Technique, we have

Now, by a theorem due to Chebyshev, the function

is bounded above (by 1). The function

thus satisfies the conditions of Newman's Tauberian Theorem, and the result follows.

The rest of the theorem is more simple.

. Then for all such

with equality exactly when

. But by theorem 1, this quantity must equal 0 in absolute value, so

. Then for any such

Again, by theorem 1, this quantity must equal zero in absolute value; it follows that

Proof. We note that

On the other hand, for any

, it follows that for any