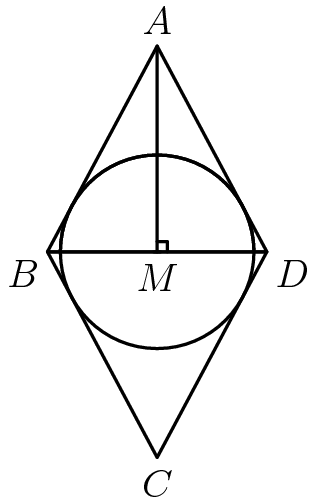 Solution 6: Area (Even simpler than Solution 5)

Credits for Asymptote go to whoever wrote this diagram up in Solution 2.

There are two ways to find the area of

. The first way is the most obvious, and that is to multiply the base times the height (

) and then divide it by two. The second way is, in a way, a little more complex. Note that

are congruent. This means that if we find the area of one triangle, we can just multiply it's area by 2 and we've found the area of the larger triangle

. But since we always divide by two, as it is in the formula for finding the area of a triangle, the multiply by two and divide by two cancel out, giving us that if we just multiply base times height of

, we will get the area of

Now you might think: "But what is the other way of finding the area". Well that is

, which would be the base, times

, the radius, which would be the height.

signifies radius). We can find

using the Pythagorean Theorem on

. The two legs are

, which gives us that the hypotenuse,

Now that we have an equation with only one variable for the radius,

, we can just solve for the radius. We get

This may seem like a lengthy explanation, but doing it yourself when you know what to do, it actually takes very little time. Try it yourself!