Electromagnetic waves have many different properties, and one of the most interesting ones is the property of duality. As asserted by the double-slit experiment (one of the experiments that inspired quantum mechanics), electromagnetic waves behave like both particles and waves, depending on the experiment being used to identify it. If an experiment tries to detect light as a particle, it will. If an experiment tries to detect light as a wave, it also will. For example, if we were to make a barrier with two extremely small slits in it, so that light could pass through, then shined a source of light on it, a detector on the other side would detect a series of lines, even in places that were not behind the slit. This can only lead to the conclusion that the detector was detecting an interference pattern. On the other hand, if we shine light onto a polished piece of metal, we find that it generates current. This should only be possible if light is a particle. 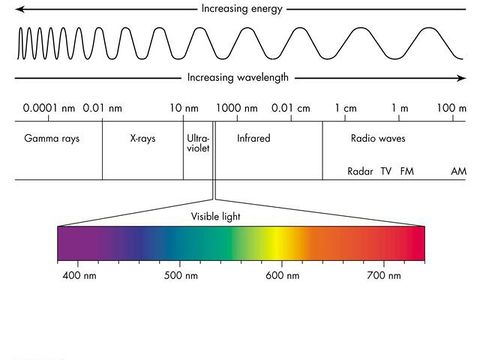 One famous equation describing the energy of light is

is the energy of the light,

is Planck's constant and

is the frequency of the light.