Difference between revisions of "Pascal's Theorem"

Pascal's Theorem is a result in projective geometry. It states that if a hexagon inscribed in a conic section, then the points of intersection of the pairs of its opposite sides are collinear: 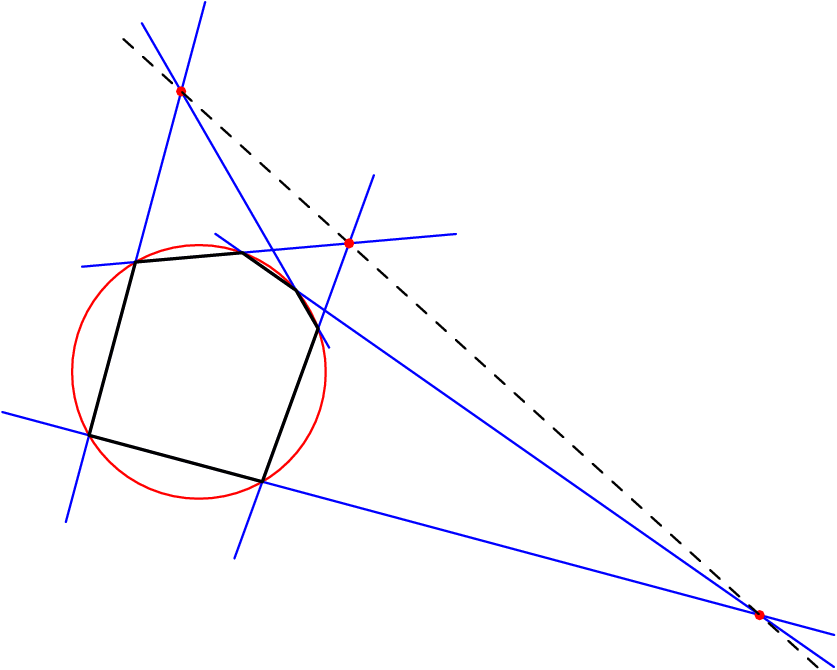 Since it is a result in the projective plane, it has a dual, Brianchon's Theorem, which states that the diagonals of a hexagon circumscribed about a conic concur.

It is sufficient to prove the result for a hexagon inscribed in a circle, for affine transformations map this circle to any ellipse while preserving collinearity and concurrence in the projective plane, and projective transformations can map an ellipse to any conic while similarly preserving collinearity and concurrence in the projective sense. Thus we will prove the theorem for a cyclic hexagon, using directed angles mod

be two circles which intersect at

be a chord of

be the second intersections of lines

are two sets of concyclic points and

are two sets of collinear points,

be a cyclic hexagon, and let

be the circumcircle of triangle

. It follows that triangles

are homothetic, so the line

passes through the intersection of lines

(which is the same as line

(which is the same as line

In our proof, we never assumed anything about configuration. Thus the hexagon need not even be convex for the theorem to hold. In fact, many useful applications of the theorem occur with degenerate hexagons, i.e., hexagons in which not all of the points are distinct. In the case that two points are the same, we consider the line through them to be the tangent to the conic through that point. For instance, when we let a triangle

, Pascal's Theorem tells us that if

are the tangents to the circumcircle of

are collinear; the line they determine is called the Lemoine Axis. In fact, Pascal's Theorem tells us that

can be the tangent lines to any conic circumscribed about triangle

and the result still holds.