Difference between revisions of "Pigeonhole Principle/Solutions"

These are the solutions to the problems related to the Pigeonhole Principle.

The Martian must pull 5 socks out of the drawer to guarantee he has a pair. In this case the pigeons are the socks he pulls out and the holes are the colors. Thus, if he pulls out 5 socks, the Pigeonhole Principle states that some two of them have the same color. Also, note that it is possible to pull out 4 socks without obtaining a pair.

Consider the residues of the elements of

. By the Pigeonhole Principle, there exist distinct

The maximum number of friends one person in the group can have is n-1, and the minimum is 0. If all of the members have at least one friend, then each individual can have somewhere between

friends; as there are

individuals, by pigeonhole there must be at least two with the same number of friends. If one individual has no friends, then the remaining friends must have from

friends for the remaining friends not to also have no friends. By pigeonhole again, this leaves at least

Now, we wish to find a

of some integer. Let

denote the fractional part of

. Now, we sort the pigeons

If any pigeon falls into the first or last hole, we are done. Therefore assume otherwise; then some two pigeons

. Assume, without loss of generality, that

. Then we have that

must fall into the first or last hole, contradiction.

1. If we have 2 line segments of lengths

); then if we have at least a line segment of length

left to check (so that

are sides of a triangle. This is true because

. This means if we check, for example,

then any number less than or equal to

will satisfy the condition of them being sides of a triangle.

2. If we have 3 line segments of lengths

to check inside an interval with a form

we will find that they are sides of a triangle. This is true because

3. If we have 2 line segments of lengths

are sides of a triangle if

. This is a generalization of 1.

To analyze the case of having 3 lines segment of lengths

, we can have two subcases. In both of them we will assume that 2 line segments' lengths are in

and 2 line segments' lengths are in

(otherwise it wouldn't be necessary to check because we would have 3 lenghts in the same interval). Also, that the difference between the two lengths in

Finally, as we wish to distribute 7 lengths in 3 intervals, the Pigeonhole Principle can be used to guarantee that at least 3 line segments' lengths belong to a same interval, and therefore to satisfy the condition.

For the difference to be a multiple of 7, the integers must have equal modulo 7 residues. To avoid having 15 with the same residue, 14 numbers with different modulo 7 residues can be picked (

). Thus, two numbers are left over and have to share a modulo 7 residue with the other numbers under the pigeonhole principle.

Label the numbers in the set

and for each of these subsets, compute its sum. If none of these sums are divisible by

). Therefore two of these sums are the same mod

We can split up the circle into nine parts as shown below, where the smaller circle in the middle has a diameter of 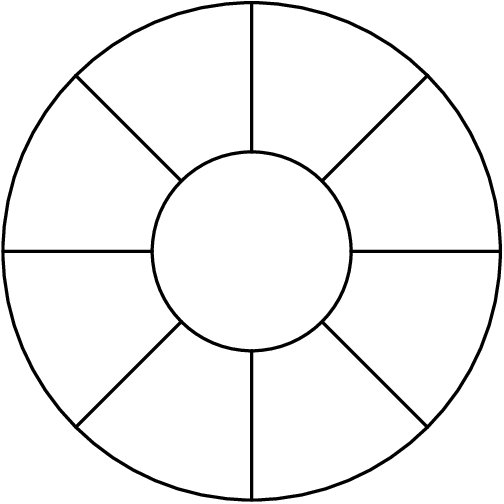 By the pigeonhole principle, at least one of these parts must contain

or more points. Any two points within the smallest circle must have a distance of less than

. For each of the

outer regions, the maximum distance between

points within the same region will be when the two points are on opposing corners, or when they are placed on the two outer corners.

First, we determine which of these lengths is longer. The segment shown in blue below has length

to approximate this value, we get

. This value is slightly above

, which means it is closer to

so we only need to verify that the length of 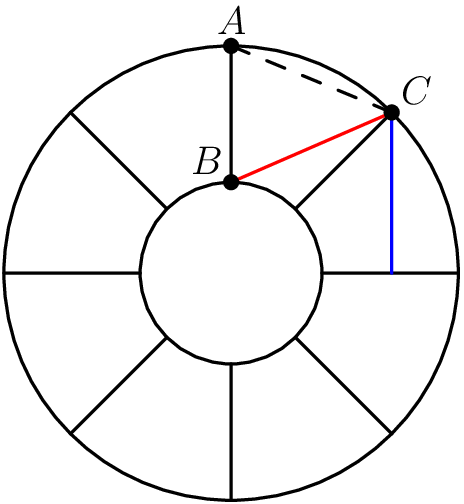 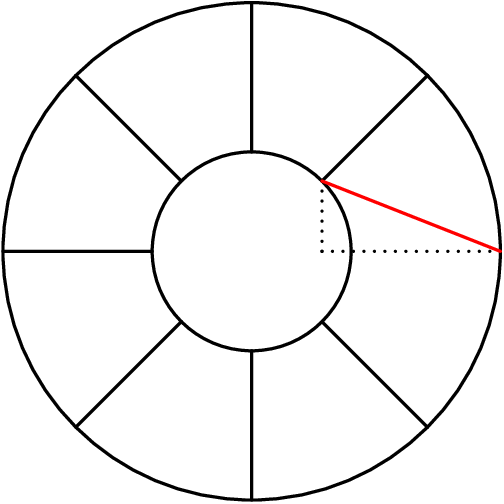 After using the pythagorean theorem, we find the red line above has length

Therefore, no two points within the same region can have a distance of

or more. As stated earlier, at least one of these regions must have

or more points, so there must be a pair of points with a distance of less than

The pigeonhole principle is used in these solutions (PDF).

In the worst case, consider that senator

hates a set of 3 senators, while he himself is hated by a completely different set of 3 other senators. Thus, given one senator, there may be a maximum of 6 other senators whom he cannot work with. If we have a minimum of 7 committees, there should be at least one committee suitable for the senator

after the assignment of the 6 conflicting senators.