is a chord of a circle such that

be the center of the circle. Join

to cut the circle at

find the radius of the circle 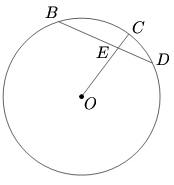 is a quadrilateral with

such that the two polynomials

have at least one root in common.

are both odd, show that

has no integral roots.

Show that, for all integers

be the four digit number formed from n by removing its middle digit. Determine all

A regular pentagon is inscribed in a circle of radius

is any point inside the pentagon. Perpendiculars are dropped from

to the sides, or the sides produced, of the pentagon.

a) Prove that the sum of the lengths of these perpendiculars is constant.

b) Express this constant in terms of the radius

units apart on a level surface. Find the set of all points on the surface which are so situated that the angles of elevation of the tops of the poles are equal.

people each know exactly one piece of information, and all

pieces are different. Every time person

nothing. What is the minimum number of phone calls between pairs of people needed for everyone to know everything? Prove your answer is a minimum.