Two circles in a plane intersect.

is one of the points of intersection. Starting simultaneously from

two points move with constant speed, each travelling along its own circle in the same sense. The two points return to

simultaneously after one revolution. Prove that there is a fixed point

be the centers of the 2 circles and let the points B, C move on the circles

, recpectively. Let A' be the other intersection of the 2 circles different from the point A. Since the angles

are equal, the isosceles triangles

are similar. Consequently, the angles

are equal and the angles

are also equal. The angles

are equal and the angles

are also equal. As a result, the point A' is on the side BC of the triangle

, which is always similar to the fixed triangle

), then any other point M of the figure F' describes a curve

similar to the curve

and it is centered on their center line

. Let p be the perpendicular bisector of the segment BC intersectong the circle (Q) at a point P different from the point M. The point A' and the circle (Q) passing through this point are fixed and the angle

is right. Therefore, A'P is a fixed diameter of the circle (Q), which means that the point P is also fixed. Q.E.D.

When the points B, C are both diametrally opposite to the point A on their respective circles, the segment

is the midline of the triangle

. The cyclic quadrilateral AA'MP inscribed in the circle (Q) is then a rectangle. Its circumcenter Q is the intersection of its diagonals AM, A'P intersecting at their midpoint and the midpoint of AM is identical with the midpoint of

. Thus the fixed point P is the reflection of the intersection A' of the circles

in the midpoint Q of the segment

This solution was posted and copyrighted by yetti. The original thread for this problem can be found here: [1]

be the antipodes of

on the two circles and let

, which is the other intersection point of the two circles. Also, let

. Our claim is that

is the fixed point. We let

be the two points; by the condition the angles are the same. So we have a spiral similarity 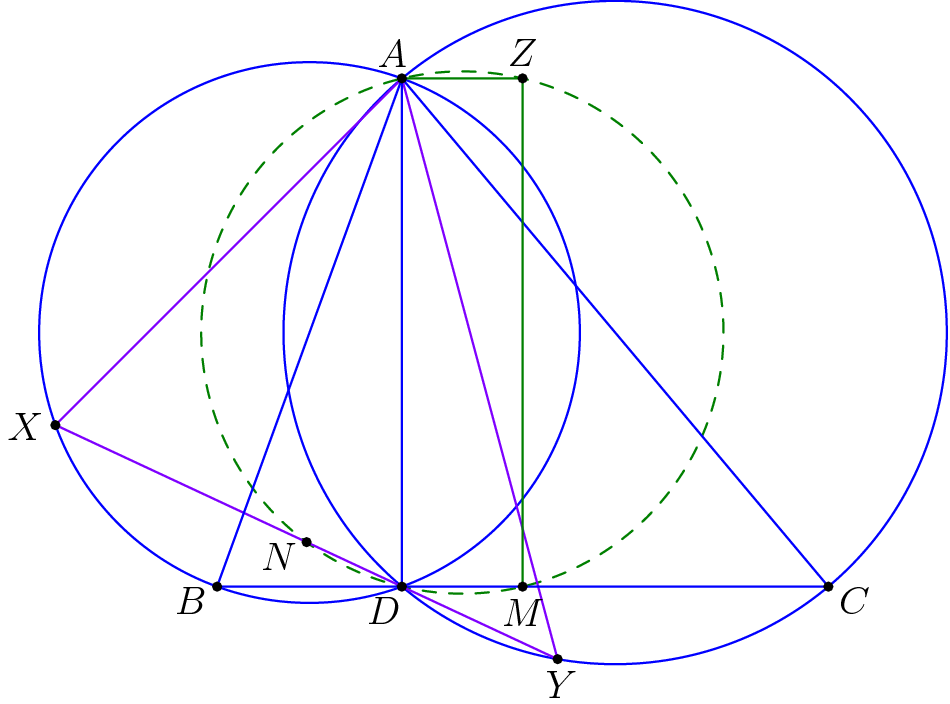 . By spiral similarity, since

are cyclic too. So actually

lies on the circumcircle of rectangle

can be identified by selecting the special case

This solution was posted and copyrighted by v_Enhance. The original thread for this problem can be found here: [2]

Let the points on the circles be

the the other intersection of the two circles, and

be the centers of the circles containing

, and the antipode of

with respect to the circle centered at

be where this such circle hits

. We first note that

, then SAS similarity gets us that

. This means we have

and similarly, we also have

is the antipode of

This solution was posted and copyrighted by kevinmathz. The original thread for this problem can be found here: [3]