, be positive integers, no two consecutive, and let

. Prove that, for each positive integer

, contains at least one perfect square.

We want to show that the distance between

is greater than the distance between

and the next perfect square following

are consecutive, we can put a lower bound on

. This occurs when all

, and the distance between

be the distance between

and the next perfect square following

. Let's look at the function

is a perfect square, it is easy to see that

is not a perfect square,

Now, it suffices to show that 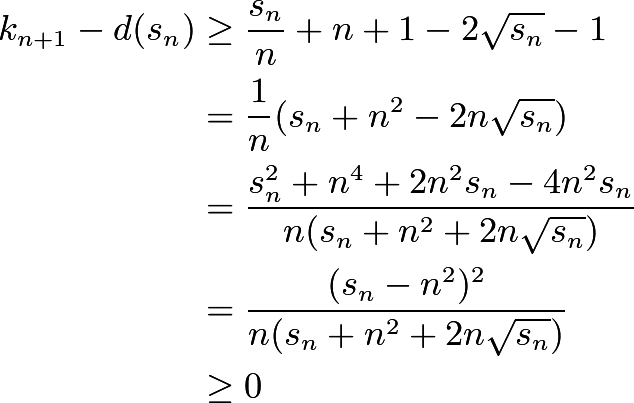 and all intervals between

will contain at least one perfect square.

We see that by increasing

by some amount, we simply shift our interval by a finite amount. It suffices to consider the case

(since this can be inducted across all positive integers). Let

. We want the smallest interval, so we have

. Simple induction reveals that the ration of consecutive squares grows slower than our linear bound. We now consider sufficiently small

). This first happens at

. By simple casework, our answer is as desired

We will first prove by Induction on

Denote this statement by

For the Base Case let

Hence, the Base Case holds.

For the Inductive Step, suppose that

we will prove that

Assume for contradiction that

doesn't hold, then we know that;

We know that since

are not consecutive, we have;

But this contradicts the Inductive Hypothesis that

thus our assumption was false and the Inductive Step is complete.

Hence, we have proved that

holds, and we will use

to solve the original problem.

Now suppose that for some positive integer

does not contain any perfect square, then we know that there must exist two perfect squares of consecutive integers, such that the smaller one is lesser than

and the larger one greater than or equal to

We thus know that there exists some

Hence, we know that;

Combining this with Inequality 2 gives;

We know that since

But this contradicts the statement

which was proved earlier.