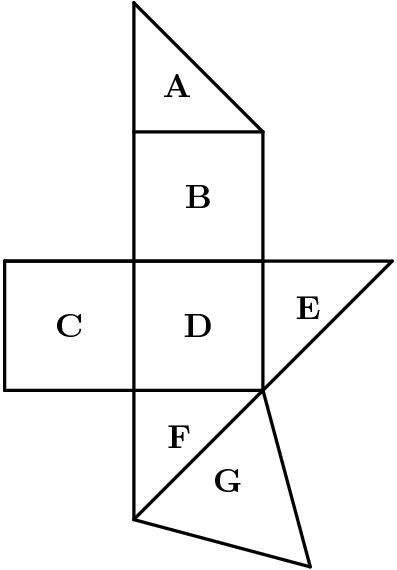 , this triangle has the length of a facial (non-spatial) diagonal of a unit cube.

Since there are three isosceles right triangles that are half the area of a face, they might represent faces of the cube that have been cut in half along the diagonal.

Putting these three clues together, we can mentally fold the solid back together to form a unit cube that has had one vertex removed. Along with this vertex, the triangular half of each of the three adjoining faces has been removed. When the unit cube is sliced like this, it will cut three of the faces into isosceles triangles like

So the volume is a unit cube with a tetrahedron removed. The tetrahedron has three right triangular faces like

. The volume of this removed tetrahedron can be calculated as follows:

Place one of the three right triangles on the ground as the base. It has an area of