During AIME testing, the AoPS Wiki is in read-only mode. No edits can be made.
AoPS Wiki
Resources Aops Wiki 1998 AIME Problems/Problem 9

Two mathematicians take a morning coffee break each day. They arrive at the cafeteria independently, at random times between 9 a.m. and 10 a.m., and stay for exactly

minutes. The probability that either one arrives while the other is in the cafeteria is

Let the two mathematicians be

. Consider plotting the times that they are on break on a coordinate plane with one axis being the time

arrives and the second axis being the time

arrives (in minutes past 9 a.m.). The two mathematicians meet each other when

. Also because the mathematicians arrive between 9 and 10, 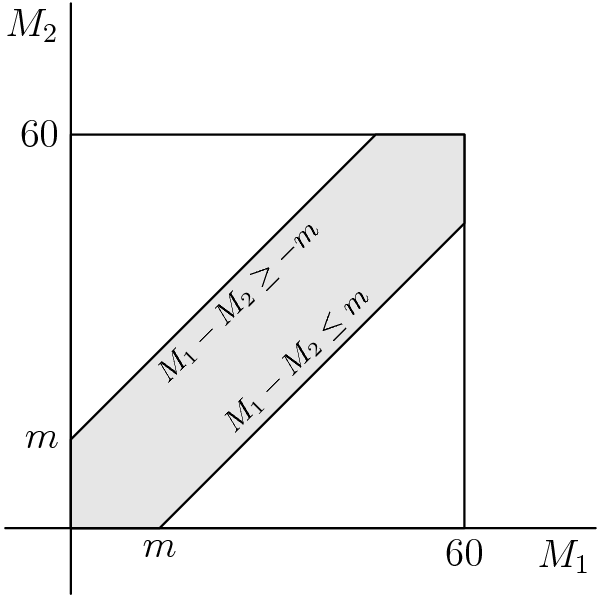 We draw a number line representing the time interval. If mathematician

comes in at the center of the time period, then the two mathematicions will meet if

comes in somewhere between

minutes before and after

comes (a total range of

comes into the cafeteria in the first or last

minutes, then the range in which

is reduced to somewhere in between

We know try to find the weighted average of the chance that the two meet. In the central

have to enter the cafeteria within

minutes of each other; so if we fix point

In the first and last

minutes, the probability that the two meet ranges from

, depending upon the location of

with respect to the endpoints. Intuitively, the average probability will occur at

So the weighted average is:

Solving this quadratic, we get two roots,

, so we discard the greater root; and thus our answer