A basketball player has a constant probability of

of making any given shot, independent of previous shots. Let

be the ratio of shots made to shots attempted after

shots. The probability that

is given to be

shots on a grid. Suppose that a made shot is represented by a step of

, and a missed shot is represented by

. Then the basketball player's shots can be represented by the number of paths from

that always stay below the line

. We can find the number of such paths using a Pascal's Triangle type method below, computing the number of paths to each point that only move right and up. 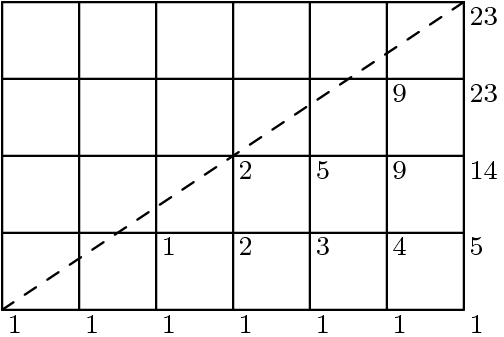 misses under the given conditions. The probability of each possible sequence occurring is

The first restriction is that

, meaning that the player gets exactly 4 out of 10 baskets. The second restriction is

. This means that the player may never have a shooting average over 40%. Thus, the first and second shots must fail, since

, but the player may make the third basket, since

To simplify counting, note that the first, second, and tenth shots are predetermined. The first two shots must fail, and the last shot must succeed. Thus, only slots 3-9 need to be counted, and can be abbreviated as follows:

The problem may be separated into five cases, since the first shot may be made on attempt 3, 4, 5, 6, or 7. The easiest way to count the problem is to remember that each X may slide to the right, but NOT to the left.

First shot made on attempt 3:

First shot made on attempt 4:

First shot made on attempt 5:

First shot made on attempt 6:

First shot made on attempt 7:

The chance of hitting any individual combination (say, for example, OOOOOOXXXX) is

Thus, the chance of hitting any of these 23 combinations is

Thus, the final answer is

. Therefore the player made 4 shots out of 10. He must make the 10th shot, because if he doesn't, then

. Now we must look at the 3rd through 9th shot.

. Therefore we can have two shots made, one shot made, or no shots made in group A.

Case 1: Group A contains no made shots.

The number of ways this can happen in group A is 1. Now we must arrange the shots in group B accordingly. There are four ways to arrange them total, and all of them work. There are

Case 2: Group A contains one made shot.

The number of ways this could happen in group A is 3. Now we must arrange the shots in group B accordingly. There are six ways to arrange them total, but the arrangement "hit hit miss miss" fails, because that would mean

. All the rest work. Therefore there are

The number of ways this could happen in group A is 2 (hit hit miss doesn't work but the rest do). Now we must arrange the shots in group B accordingly. Note hit miss miss miss and miss hit miss miss fail. Therefore there are only 2 ways to do this, and there are

total possibilities for this case.

Taking all these cases into account, we find that there are

. Each of these has a probability of

. Therefore the probability that we have