is inscribed in a quadrilateral

Our proof is based on the following key Lemma.

Lemma: If a circle

, is inscribed in a quadrilateral 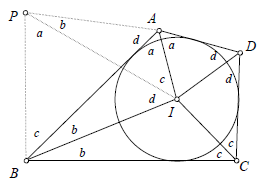 outside of the quadrilateral such that

implying that the quadrilateral

is cyclic, it is not difficult to see that, as indicated in the figure,

are similar, implying that

Substituting the above equalities into the identity

are similar, implying that

Substituting the above identity back into

Now we prove our main result. By the Lemma and symmetry, we have

By the AM-GM Inequality, we have

where the equality holds if and only if

where the equality holds if and only if

. (The latter equality is true because the circle

is inscribed in the quadrilateral

By the given condition in the problem, all the equalities in the above discussion must hold, that is,

are congruent, implying that