by cutting off each corner of

at the edges’ trisection points. In other words,

is the polygon whose vertices are the

, connected in order around the boundary of

be an isosceles trapezoid with side lengths

. If the difference of the areas of

is written as a fraction

in lowest terms, calculate the number of positive integer factors of

be the difference in the areas between

. Let our trapezoid be

); then without loss of generality construct diagonal 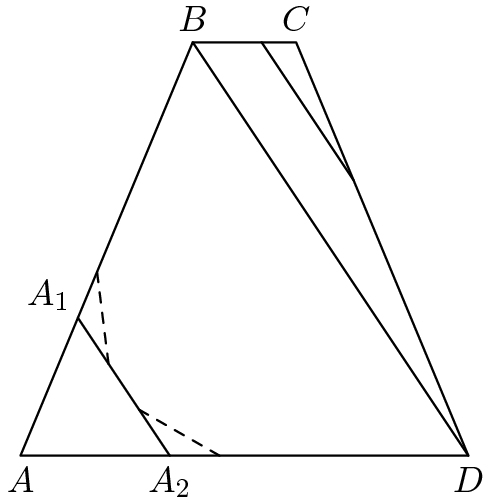 be the trisection points on

, respectively, that are closest to

. Their areas are in the ratio

, we get the same result, so

We now consider the effects of the second clipping. Without loss of generality consider what happens along the vertex

be the trisection point along

be the trisection point along

definition of the area of a triangle, we see that

. A similar clipping about

; around each clipped region in

, we clip a new area

. Generalizing, we have the recursion