be a positive integer. Equilateral triangle ABC is divided into

the number of rhombuses that contain eight small equilateral triangles. Find the difference

of the original length. Then we can count the two rhombuses.

Let the side length of the triangle be

, so the total area is

Since the big triangle is divided into

Thus, the length of each smaller triangle is

Since the lengths of each smaller triangle is

and are parallel to the big triangle’s sides, the triangles are arranged like the below diagram. In diagram,

. Now we can count the rhombuses.

lines and the shortest row has

line. Thus, there are

lines parallel to one side, resulting in a total of

lines or rhombuses with 2 equilateral triangles.

For a rhombus to have eight triangles, the center line must have two lines and the rows above and below must have one line. We can count the number of segments made of two lines that are not in the last row in the big triangle. The second longest row in the triangle has

lines, while the second shortest row has

lines. Thus, there are

valid segments from two lines parallel to one side, resulting in a total of 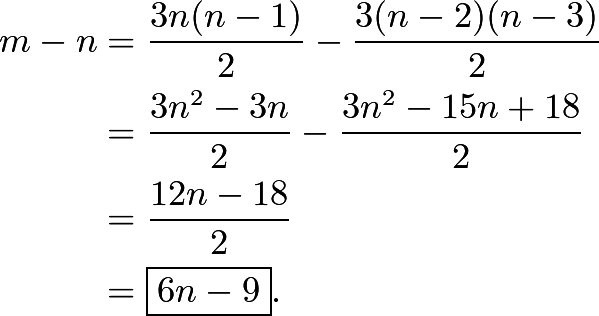