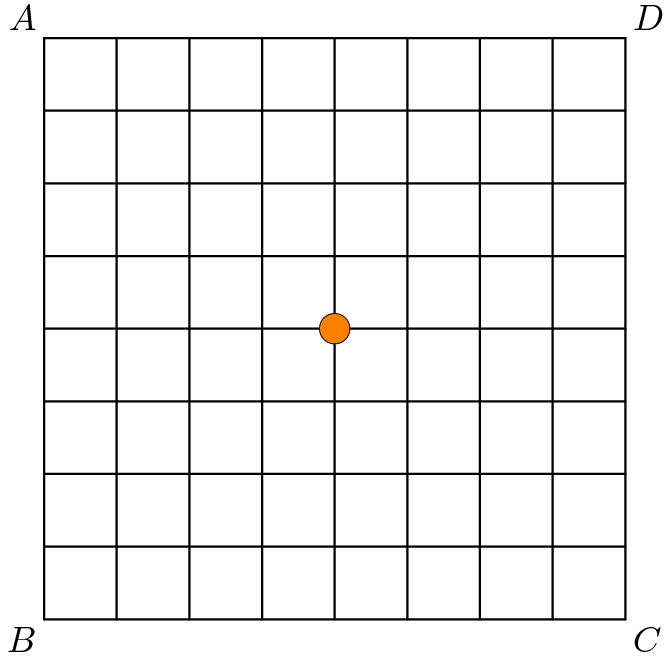 (a) Find all positive integers

or prove that there are no solutions.

(b) Find all positive integers

or prove that there are no solutions.

Completely describe the set of all right triangles with positive integer-valued legs such that when four copies of the triangle are arranged in square formation shown below, the incenters of the four triangles lie on the extensions of the sides of the smaller square. (Note: the incenter of a triangle is the center of the circle inscribed in that triangle.)

Joel is playing with ordered lists of integers in the following way. He starts out with an ordered list of nonnegative integers. Then, he counts the number of

’s, and so on in the list, writing the counts out as a new list. He stops counting when he has counted everything in the previous list. Then he takes the second list and applies the same process to get a third list. He repeats this process indefinitely.

For example, he could start out with the ordered list

, and then stops counting, so the second list is

. Then he counts one

. Here are the first few lists he writes down:

If instead he started with

, he would write down:

If Joel starts out with an arbitrary list of nonnegative integers and then continues this process, there are certain lists

of length two that he might end up writing an infinite number of times. Find all such pairs

that satisfy both of the following equations.

equilateral triangles each, stacked on top of each other in a diamond shape, as shown below when

as the southwest corner and point

as the northeast corner. A step consists of moving from one point to an adjacent point along a drawn line segment, in one of the four legal directions indicated. A path is a series of steps, starting at

, such that no line segment is used twice. One path is drawn below. Prove that for every positive integer