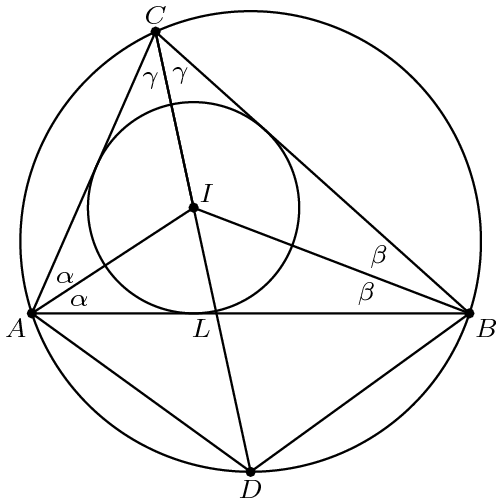 We can just say that quadrilateral

is a right kite with right angles at

. Let us construct another similar right kite with the points of tangency on

. Note that we only have to look at one half of the circle since the diagram is symmetrical. Let us call

for simplicity's sake. Based on the fact that

we can use triangle proportionality to say that

. Using geometric mean theorem we can show that

. With Pythagorean Theorem we can say that

. Multiplying both sides by

and moving everything to LHS will give you

must be in the form

we can assume that

is most likely a positive fraction in the form

. Testing the factors in synthetic division would lead

, giving us our desired answer

First, using the diagram above, extend the bisector of

to pass through points

as stated in the problem. Then, connect

. Note, that since points

As a result, apply Ptolemy's Theorem on the quadrilateral, denoting the length of

(they both must be equal, as

), and the lengths of

After applying Ptolemy's, one will get that:

are similar, yielding the following equation once simplifications are made to the equation

, with the length of

Next, drawing in the bisector of

, and applying the angle bisector theorem, we have that:

in the second equation, and

in the third equation and plugging them both back into the first equation, and making the substitution

, we get the quadratic equation:

, when we rewrite the above equations in terms of

. Thus, our answer is 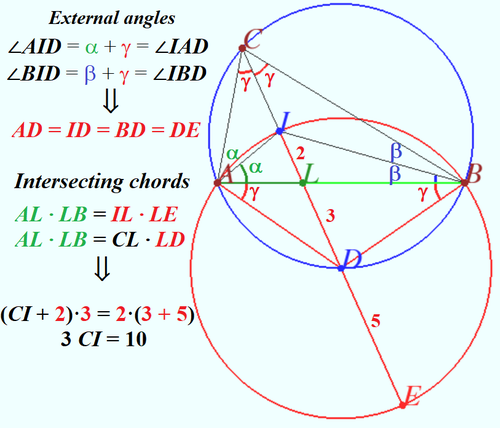