Ada and Otto are engaged in a battle of wits. In front of them is a ﬁgure with six dots, and nine sticks are placed between pairs of dots as shown below. The dots are labeled

. Ada begins the game by placing a pebble on the dot of her choice. Then, starting with Ada and alternating turns, each player picks a stick adjacent to the pebble, moves the pebble to the dot at the other end of the stick, and then removes the stick from the ﬁgure. The game ends when there are no sticks adjacent to the pebble. The player who moves last wins. A sample game is described below. If both players play optimally, who will win? 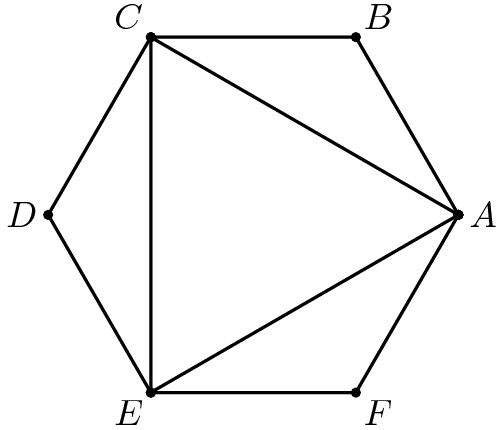 1. Ada places the pebble at B.

2. Ada removes the stick BC, placing the pebble at C.

3. Otto removes the stick CD, placing the pebble at D.

4. Ada removes the stick DE, placing the pebble at E.

5. Otto removes the stick EA, placing the pebble at A.

Four fair six-sided dice are rolled. What is the probability that they can be divided into two pairs which sum to the same value? For example, a roll of

can be divided into

, each of which sum to

cannot be divided into two pairs that sum to the same value.

Can each positive integer

be colored either red or blue, such that for all positive integers

(not necessarily distinct), if

are not all the same color?

can have a circle inscribed inside of it (meaning there exists a circle that is tangent to all four sides of the quadrilateral), then ﬁnd

be a sequence of integers (positive, negative, or zero) such that for all nonnegative integers