-excircle is a circle in the exterior of

that is tangent to side

of the triangle and tangent to the extensions of the other two sides. Let

be tangent to the

Instead of trying to find a synthetic way to describe

being tangent to the

-excircle (very hard), we instead consider the foot of the perpendicular from the

, hoping to force something via the length of the perpendicular. It would be nice if there were an easier way to describe

, something more closely related to the

-excircle; as we are considering perpendicularity, if we could generate a line parallel to

, that would be good.

So we recall that it is well known that triangle

over the angle bisector at

, which is parallel to

is tangent to the reflection of the

-angle bisector. But it is well-known that the

-excenter lies on the

-angle bisector, so the

-excircle must be preserved under reflection over the

is tangent to the

-excircle.Yet for all lines parallel to

, there are only two lines tangent to the

-excircle, and only one possibility for

The answer is no.

Suppose otherwise. Consider the reflection over the bisector of

-excircle is fixed, so line

must also be tangent to the

is cyclic, we obtain

is a chord in the circle with diameter

and cannot be tangent to the excircle.

The remaining case is when

is also a diameter, so

is a rectangle. In particular

. However, by the existence of the orthocenter, the lines

Suppose for the sake of contradiction that it is possible for

to be tangent to the

. By equal tangents, we have

It is also well known that

It is well known (by an easy angle chase) that

, so we must have the ratio of similitude is

which is absurd since

is a right triangle. We reached a contradiction, so we are done. 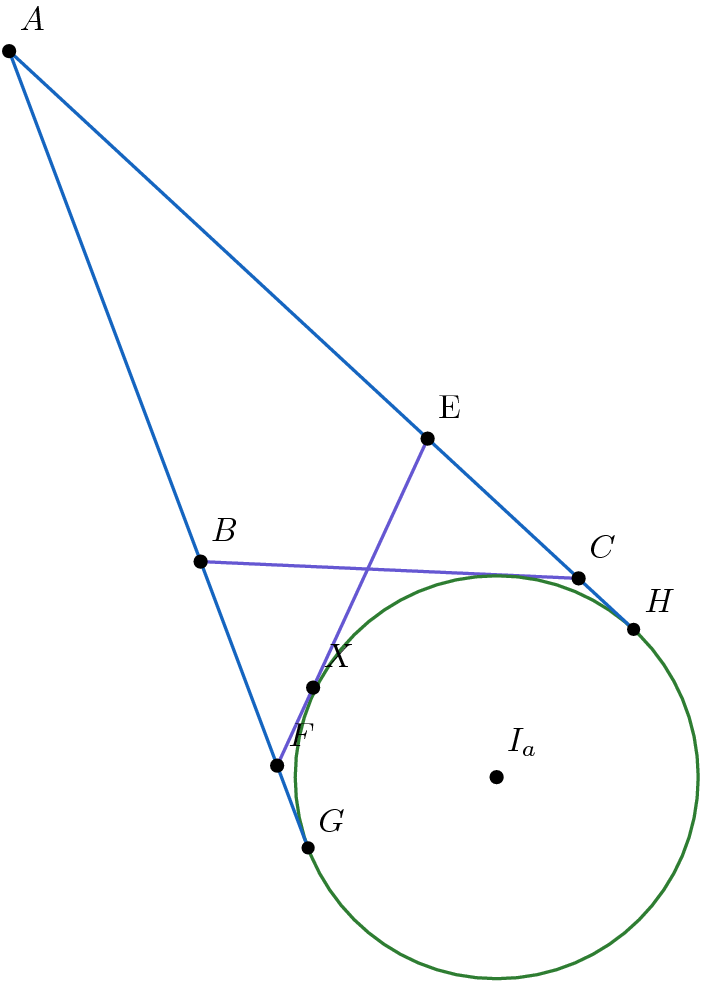 We claim that the answer is no. We proceed with contradiction. Suppose that

is indeed tangent to the a-excenter. Define the point of tangency to be

to be the a-excenter. It is a well-known fact that

lies on the angle bisector of

. Notice that by Power of a Point:

Therefore, adding, we see that:

It would be rather nice if we could re-write

We now seek to re-write

. Using the law of cosines:

Putting this all together, we see that:

Now, we seek to write

in terms of the side lengths of the triangle. Notice that:

is the semi-perimeter. We get that:

Returning to our original problem:

It is a well-known fact that

which is a contradiction. Hence, our original assumption that

is tangent to the a-excircle is incorrect.