During AIME testing, the AoPS Wiki is in read-only mode. No edits can be made.
AoPS Wiki
Resources Aops Wiki 2020 CIME I Problems/Problem 9 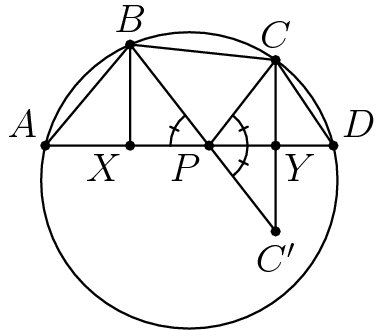 are the projections of

, respectively. We want to find

which by similar triangles is also equal to

each share the same base, so this can also be interpreted as

because both angles subtend arc

on the circumcircle of Quadrilateral

. We can then replace every

, but realise that if we do that, the

s will cancel out. The requested area ratio is thus

We look for the ratio

so thus we use the Law of Sines since it involves ratios.

By the Law of Sines used on

Now we just need to find

or its reciprocal to get the answer.

We use Law of Sines again on

The problems on this page are copyrighted by the MAC's Christmas Mathematics Competitions.